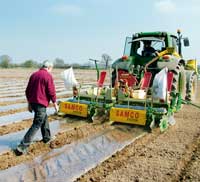 Assessing soil temperatures before maize drilling is even more important this year, as sowing too early, in cold conditions will impact on crop yields, according to Limagrain’s Tim Richmond.

“Because certain areas of the country have had high levels of rain, land may be wet and cold, making early sowing undesirable,” he says.

For successful maize establishment, soils must have reached 8-10C for 4-5 days. “Soil temperatures should be assessed at a depth of 4-5in and maize sown when temperatures are consistently maintained.”

When sowing before temperatures have reached the desired level, seeds will take longer to germinate, plant populations will be lower and maize will be more prone to fungal disease.

“It is well worth waiting until conditions are right. When maize is sown too early, plants will be yellow and sickly – by waiting two weeks, this later crop could easily overtake the earlier crop sown in the cold.”

In fact, research has shown sowing maize when air temperatures are 11.4C rather than 6.8C, increased numbers of emerged plants from 54% to 96%. Shoot emergence also took 18 days instead of 53 days at the lower temperature.

“With the advent of new early, maturing, high yielding, shorter growing season varieties, there is just no reason to risk sowing early.”

When soils are still only at 5-6C because ground is wet, it may be worth considering opening the soil up, says Simon Draper, MGA agronomist.

“When, on 16 April, you have had a week of dry weather and soils are still cold and wet, opening soils up may be the only way to warm the ground – use a spring tine cultivator at no more than 3-4in.”

When soils are below 8C, it is best to delay drilling until conditions improve, but when a lot of maize needs to be put in, and it is necessary to drill for planting to be finished by the first week of May, it is worth considering increasing the seed rate, he says.

“Upping the seed rate by 5% can cover losses when forced to sow in sub optimal conditions.

“However, there is danger you could end up with a bulkier, leafier crop, so those wanting starch should avoid the risk.

“It is generally a trade off of risks – when you drill too late there is the potential to lose 10-15% of yields – it is a decision you will have to make.”

Under such wet conditions, working land too much may also be unwise, he says. “Do as little seed-bed preparation as you can get away with to reduce soil compaction.”

However, for producers planting maize under plastic, soil temperatures are not so critical, says Mr Draper. “Maize under plastic can be drilled earlier when soils are at 5-6C as plastic will create a warmer environment.” But before choosing to grow maize in such a way, it is important to ask whether it is economically viable, he stresses.