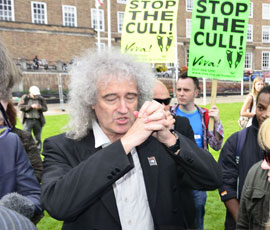 Brian May has been named as the new vice-president of the RSPCA.

The animal charity confirmed details of his appointment on Thursday (13 September).

Mr May, lead guitarist with rock group Queen, is a fierce critic of the badger cull and supports the repeal of the Hunting Act.

The RSPCA said it had awarded him the role “in recognition of his fantastic work for animals”.

Mr May is a long-standing animal rights advocate who set up the charity Save Me in 2010 to support wildlife.

Read more on Brian May and the badger cull

Queen star Brian May under fire over badger cull protest