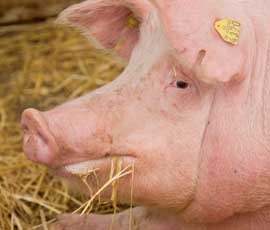 Pigs housed in the proposed ‘mega farm’ in Derbyshire will have a higher standard of living than many pigs in smaller units, a leading animal welfare group has admitted.

Compassion in World Farming said Midland Pig Producers’ planned 2,500-sow pig unit in Foston in Derbyshire delivered welfare standards that were denied to the majority of indoor-reared pigs in the UK.

The pressure group said it was in an “unusual situation” where the proposals addressed the issues usually associated with intensive agriculture, including tail docking, teeth clipping, free farrowing and straw bedding.

“These proposed standards offer the potential for the pigs to have a higher quality of life than many of their counterparts in other UK and EU farms,” a spokesman said.

But he said it still believed developing large-scale units was a “wrong-turn” for farming.

“What we have said is that we recognise they are trying to go for [the RSPCA’s] Freedom Food standards, but this doesn’t mean to say that we believe mega units are okay,” he added.

The comments came as the Soil Association prepared to hold a public meeting for local residents concerned about the proposed development.

The organisation said the meeting in Burton on Trent, scheduled for tonight (23 June), is open to people interested in stopping the development, or those concerned about the impact it could have on human health and the environment.

The association was also backed by actor Dominic West, who stars in hit TV show The Wire, who said the “shameful” system of factory farming would destroy the countryside and create a new breed of superbugs.

“The Foston proposal signals a fundamental shift in British farming towards the US and EU system of giant corporate-owned factories confining thousands of pigs in buildings and feeding them antibiotics to keep them alive,” he said.

“Treating pigs as industrial production units on such an intensive level is not only shameful but also unsustainable. It is the antithesis of what people want the British countryside and farming to be, and it poses a potential threat to human health and the environment.”