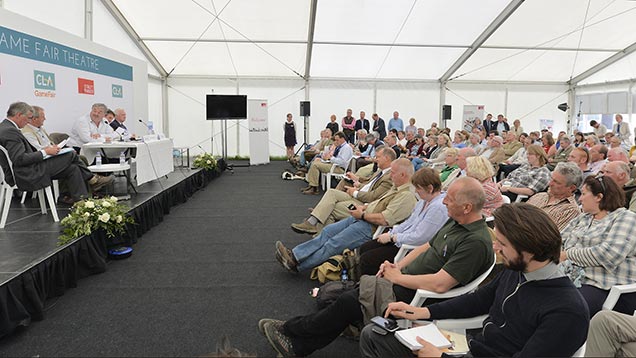 Farm leaders and conservationists clashed over the relationship between land management and wild life at the CLA Game Fair.

The event, held at Harewood House in Yorkshire from 31 July to 2 August, focused on the valuable conservation work being carried out by farmers and landowners across the British countryside.

It provided a platform for a debate on one of the most hotly contested countryside topics – whether conservation is at odds with modern agriculture and land management.

The debate, entitled “Landowners and wildlife: friends or foes?”, was chaired by CLA president Tim Breitmeyer and debated in front of a live audience at the show.

Mr Paterson, the Conservative MP for North Shropshire, a strong proponent of the badger cull as part of efforts to eradicate TB, argued that the countryside was a place that needed “constant management and intervention”.

He said: “The work of organisations such as the Game and Wildlife Conservation Trust demonstrates the importance of managing both our landscapes and wildlife populations.

He added: “I am a practical environmentalist. I find common cause with all those who passionately believe that we have a duty to pass on a better environment than the one we inherited.

“Too many times those that say they are doing their best to protect the environment shy away from the difficult decisions.”

Mr Breitmeyer said: “Protecting and conserving rural landscapes for all who live and work there is a high priority for land managers and farmers, but they often come under fire from various groups who have different priorities.

“Discussion and compromise by all stakeholders to ensure the common goal of a countryside where the natural wildlife thrives alongside a diverse and productive rural economy is one of the greatest challenges we face.”

See also: From pheasants to Farage… A timeline of the CLA Game Fair show

UKIP leader Nigel Farage visited this year’s show. In an interview with the Yorkshire Post, Mr Farage said: “I think there is a big biodiversity benefit to this country from shooting.

“There is always a debate about how land is managed, whether it’s grouse moor, partridge or pheasant.

“But managing things properly is right. The people that manage these [Yorkshire] moors want to maintain them in a traditional way.

“On balance, it’s better to have people looking after this stuff and revenue coming in from shooting than not.”