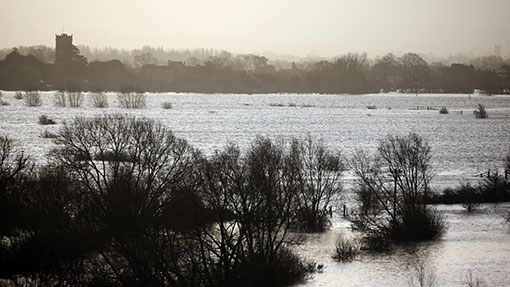 David Cameron said he will “rule nothing out” to help alleviate flooding that has engulfed thousands of hectares of farmland in Somerset.

The prime minister conceded that the situation was “unacceptable” and said rivers would be dredged after farmers and local residents called for urgent action to combat flooding across 11,500ha (28,400 acres) of the Somerset Levels.

“It’s not currently safe to dredge in the Levels, but I can confirm that dredging will start as soon as it is practical, as soon as the waters have started to come down,” said Mr Cameron in response to a question from Taunton MP Jeremy Browne on Wednesday (29 January).

Local farmers have been battling high water levels for weeks. Many have blamed the flooding on a chronic lack of dredging and river maintenance by the Environment Agency. Some farms have seen their land flooded three times in the past 14 months.

Beef and sheep producer John Hebditch, who farms at North Curry, told Farmers Weekly: “Lots of things could be done – but it would be quickest, cheapest and probably easiest to get on and give the rivers a good dredge now and some annual maintenance.”

Mr Cameron said the Environment Agency was pumping “as much water as is possible” given the capacity of local rivers. High-volume pumps would be sent to the area to increase the volume of the pumping operation as soon as there was capacity in the rivers to support it.

The government’s dredging announcement comes after DEFRA secretary Owen Paterson announced an action plan would be drawn up within six weeks following a visit to the area on Monday. But farmers have demanded more urgent action.

Campaigners belonging to the Flooding on the Levels Action Group, which has called for the rivers Parrett and Tone to be dredged, welcomed Mr Cameron’s statement that dredging would start as soon as possible. The group had feared that Mr Paterson’s plan would not go far enough.

The Environment Agency said it would now be working with government, the local council, Internal Drainage Boards and other partners on a long-term action plan for tackling flood risk on the Somerset Moors and Levels.

Some £45m was spent by the agency in the past financial year on improving rivers, including dredging and weed clearance. In Somerset, de-silting work was last carried out on pinch points on the Parrett and Tone rivers in November, the agency added.