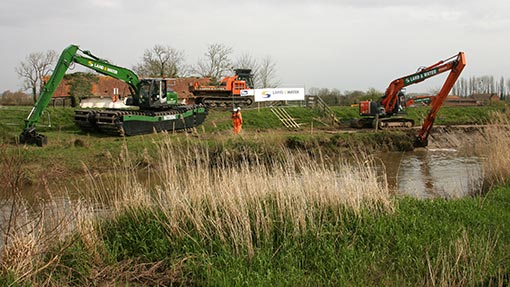 Dredging must be speeded up on the Somerset Levels if rivers are to be cleared in time for the coming winter, farmers and local residents have warned.

Some 8km of the rivers Parrett and Tone are due to be dredged by Environment Agency contractors to help avoid a repeat of the 2013-14 floods which engulfed 65sq kilometres. Some 250,000t of mud and silt are expected to be removed from the rivers over the coming months.

Dredging started on 31 March to help water move more freely. But so far just 13,050t of silt have been removed from a 445m stretch of the River Parrett, according to an update published by the Environment Agency on 16 May.

Local beef farmer Heather Venn told Farmers Weekly: “The Environment Agency schedule is to carry out most of the majority of the dredge this autumn. There is a significant problem here because that is not acceptable.”

Mrs Venn said the agency had told her dredging had started “slow and steady” because contractors were on a learning curve and mindful of health and safety. “If they are on a learning curve, they shouldn’t be doing the job in the first place – that’s my view,” she said.

Rebecca Horsington, a campaigner from the Flooding on the Levels Action Group (FLAG), said it would take three years to complete the dredging if it carried on at its current rate. “They should ramp it up now while the weather is good, rather than waiting until later.”

The Environment Agency update said its contractors were continuing to work long days from Monday to Friday. “We are looking at the possibility of some weekend working as a further contingency,” it said.

“We are looking at our programme, resources and working times to ensure works are completed as quickly as possible,” the agency said.

The agency said it was working to overcome issues which had resulted in a slight delay to beginning work in the Tone at Athelney Bridge and on the Parrett from Ham Lawn Farm to Westonzoyland pumping station.

“We are likely to start in these locations at the end of May rather than mid-May. However, we remain on track to complete by the autumn,” it added. Farmers Weekly contacted the Environment Agency for further comment but did not receive a reply.