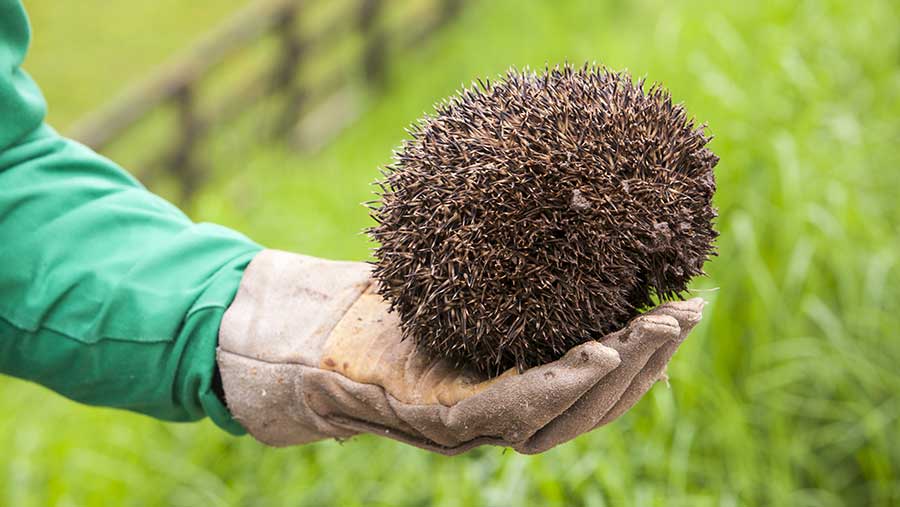 Two wildlife charities have called for farmers to help protect hedgehogs after discovering at least half their population has been lost from the British countryside since the millennium.

The British Hedgehog Preservation Society (BHPS) and People’s Trust for Endangered Species (PTES) published The State of Britain’s Hedgehogs 2018 on Wednesday (7 February), which shows hedgehogs in rural areas are in severe decline.

Emily Wilson, hedgehog officer for Hedgehog Street, a public action campaign run by BHPS and PTES, explained: “The intensification of agriculture through the loss of hedgerows and permanent grasslands, increased field sizes, and the use of pesticides, which reduce the amount of prey available, are all associated with the plunge in numbers.”

The charities want to encourage farmers, who manage approximately 70% of UK land, to help protect hedgehogs by restoring hedgerows to improve shelter and nesting opportunities, and managing field margins and grasslands in ways that encourage abundance and diversity of invertebrates.

The groups accept that hedgehogs are also killed on roads and by predators and that badgers also compete for food. But they believe badgers are not the most important factor affecting hedgehogs as when the habitat is rich with nesting and feeding sites, the species are able to coexist.

NFU countryside adviser Claire Robinson has said the reasons for the decline in hedgehog numbers are more complex than stated in the report.

She said: “Farmers are responsible for 400,000km of hedgerows across our countryside and these have been protected since 1997. Pesticide usage has been declining since 1990, despite a larger area of farmland being treated each year.

“Over the past two decades there has been a revival of hedge planting on farms, with farmers keen to participate in the Countryside Stewardship Hedgerow and Boundary Grant scheme. More than 30,000km of hedgerows have been planted or restored by farmers, providing shelter and food for a range of wildlife, such as hedgehogs.”

In 2007 hedgehogs were made a priority conservation species in Britain. Hedgehog Street was launched in 2011 to inspire the British public to help hedgehogs and other wildlife that depend on their gardens, and more than 47,000 Hedgehog Champions have signed up to help.