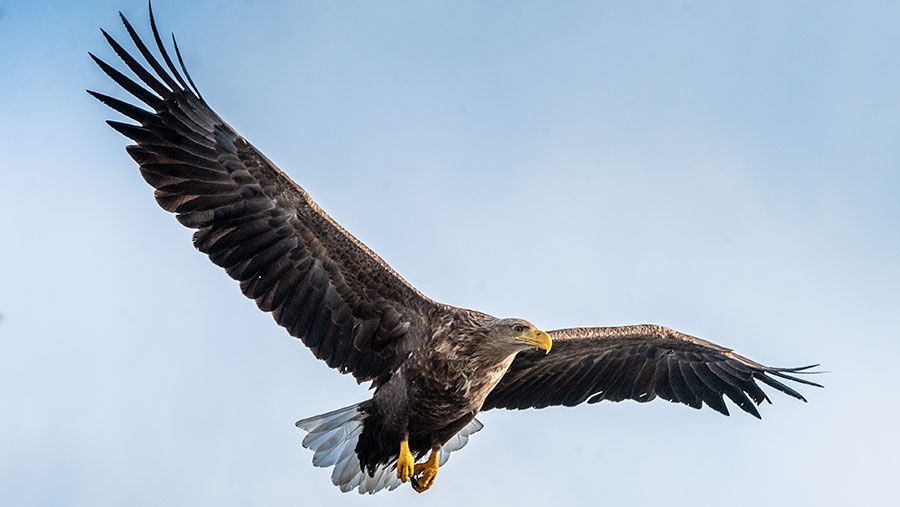 Plans to reintroduce white-tailed eagles to Norfolk have been approved amid industry concerns that the apex predators could prey on vulnerable livestock.

Following a public consultation, Natural England has granted a licence to the Roy Dennis Wildlife Foundation and Wild Ken Hill to release up to 60 white-tailed eagles over 10 years, starting in 2022.

The consultation, which took place in January and February, revealed that 91% of respondents supported the proposals, including 83% of people who were “strongly supportive” and 63% of farmers also indicated support for the proposals.

Wild Ken Hill, a conservation and sustainable farming project on the west coast of Norfolk, said it was “delighted” that the licence had been approved. It insisted the eagles would “fit into the landscape very well”.

The Natural England licence will allow up to 60 juvenile birds to be released from the Wild Ken Hill estate over a 10-year period, with the aim of establishing a small breeding population of six to 10 pairs in the region.

The juvenile birds will be sent from Poland, where there are more than 1,000 pairs of white-tailed eagles. But due to international travel complications caused by the Covid-19 pandemic, the first birds are likely to be released in 2022.

A spokesman for Natural England said the government agency had carefully assessed the project and concluded: “We are satisfied that there are no significant risks associated with it.”

But farming organisations, including the National Pig Association (NPA) and the National Farmers Union (NFU), raised concerns that the birds may target livestock.

NPA senior policy adviser Charlie Dewhirst said: “We are disappointed that Natural England has given the project the green light without addressing the concerns of NPA members.

“East Anglia is home to a significant proportion of the UK’s outdoor pig herd and farmers are rightly worried by the potential impact of introducing these large apex predators.”

NFU East Anglia environment adviser Rob Wise added: “The likely range of these birds is home to about half of the country’s outdoor-reared pigs and poultry, and also has a significant amount of sheep grazing.

“Farmers are worried that the sea eagles will prey on livestock, including lambs, piglets and free-range poultry. Many members are also concerned about the effect sea eagles will have on their conservation efforts.”

A project to reintroduce white-tailed eagles, also known as “sea eagles”, on the Isle of Wight began in 2019. The species has also been reintroduced to Scotland and Ireland in other projects.

Sheep farmers have reported cases of the eagles targeting their lambs.