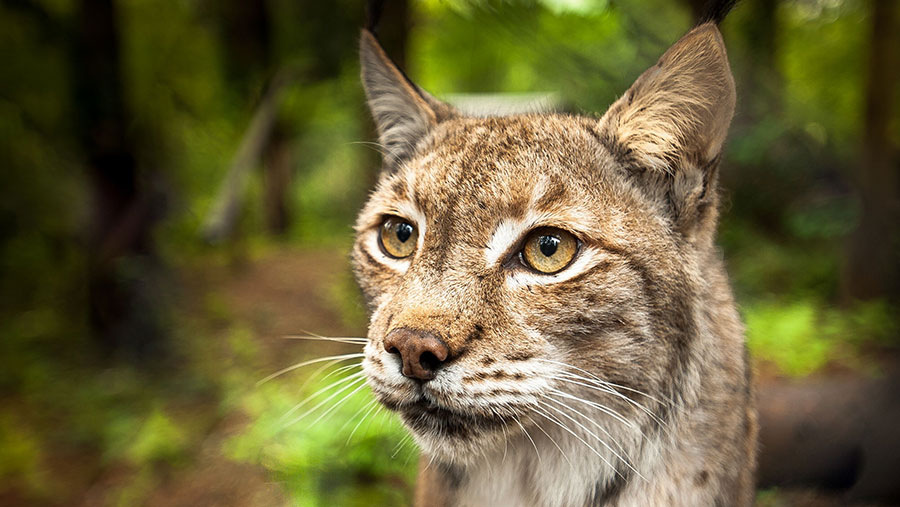 Scotland could be the best UK location to support the reintroduction of wild lynx in the countryside, but the animals would likely target farmers’ sheep, says a leading ecologist.

Speaking at a conference on rewilding at the Royal Agricultural University (RAU), David Hetherington called for a “respectful dialogue” between farmers and lynx supporters to see if a compromise could be struck “between the lynx and us”.

Do you have a view on this? If so, we’d like to hear them. Email farmersweekly@proagrica.com

Cairngorms-based ecologist Dr Hetherington said the biggest scope for conflict around reintroduction of lynx in the UK centred around the threat to livestock, in particular sheep.

An application from the Lynx Trust UK for a licence to reintroduce six Eurasian lynx to Kielder Forest in Northumberland is being considered by Natural England.

Advocates expect the lynx would bring a range of benefits, helping to control and reduce the UK’s overpopulated deer numbers, reducing damage to forests and improving habitat for smaller animals in the process.

But farmers fear that the Eurasian lynx will prey on sheep, and it has encountered strong opposition from the industry, especially the National Sheep Association (NSA).

Dr Hetherington said the Norwegian government pays out about €3m (£2.67m) each year in compensation to farmers who claim to have lost sheep.

Some 97% of compensation claims in Norway are completed by filling in a form and there is no form of verification. “It’s just a phone call away and the cheque will come. It’s a remarkably cavalier approach – and the Norwegians know that.”

Dr Hetherington said: “Norwegians are grazing large amounts of sheep – 2.5 million – in woodland, where there are very few deer and there is loads of ambush cover. You can see what goes wrong.

“Norwegian government-funded scientists have concluded two things – if you have four or more roe deer per sq km of forest, you have much less scope for sheep predation.”

In other countries where sheep graze in flocks in open pasture alongside woodland, he described sheep predation as “small-scale with one or two local attacks”.

Dr Hetherington was asked about his opinion on the prospects of a lynx reintroduction in Kielder Forest.

He said: “Looking from the outside in, it seems like there’s an awful lot of upset among sheep farmers in the wider Kielder landscape.

“The sensitive discussion we should have had hasn’t happened, which is going to make lynx reintroduction hard to pull off, I would suggest.”