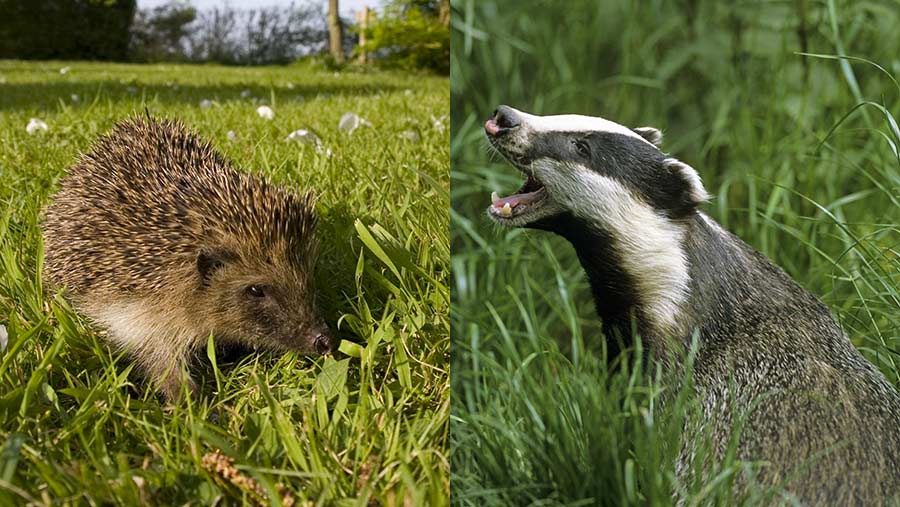 A Twitter row has broken out between farmers and the RSPCA over claims and denials that badgers are partly to blame for a decline in hedgehog numbers.

Welsh hill farmer Gareth Wyn Jones said he was delighted to see hedgehogs feature on BBC Countryfile and he asked the RSPCA on Twitter whether the increasing badger population was affecting their numbers.

David Bowles, head of public affairs at the RSPCA, replied: “No evidence of badger population impacting on the hedgehog – standard lazy response from a farmer #factsimportant”

See also: Badger population rises to 485,000 in England and Wales

Farmers then tweeted a link to a Defra-funded report published in the journal Plos One which found that hedgehog numbers increased when badgers were removed from an area.

The paper looked at the effect of culling in the government’s Randomised Badger Culling Trial (RBCT) and it found that hedgehogs “more than doubled over a five-year period” from the start of culling on grassland sites.

The paper explains that badgers, which are a known wildlife reservoir of bovine TB, and hedgehogs are “not only predator and prey”, but they compete for the same food sources.

“Badgers have a broad omnivorous diet, primarily consisting of invertebrates and plant matter, though they also eat smaller mammals including hedgehogs,” the study found.

Dairy farmer Phil Nash tweeted that the subject “needs to be discussed and the effects on other species taken into consideration”. Mr Nash told Mr Bowles: “Open your mind to wider implications. Let’s talk.”

Tim Bonner, chief executive of the Countryside Alliance, accused the RSPCA of “being blinkered” on the issue and “unable to accept the evidence”.

He told Farmers Weekly: “Frankly, everyone who takes a reasonable approach in the countryside knows that there is a significant problem with badger predation.

“No one is saying that the right way of dealing with it is necessarily culling badgers. But for Mr Bowles to reject something that is so obvious in the first instance raises questions about the credibility of the RSPCA.

“It is driven by the agenda against badger culling rather than the real evidence and the science that has been published.”

Mr Bowles said: “The issue of a decline of hedgehog populations is a controversial one. We know that badgers predate hedgehogs but the extent to which this impacts on populations has not been quantified.

“Many factors, such as changes in the countryside through increased development and hedgerow destruction have led to a decrease in suitable habitats for hedgehogs and this is probably far more likely to have had an impact on hedgehog populations.”

BHPS released a joint statement with the People’s Trust for Endangered Species, saying: “Several studies have demonstrated that badgers will kill hedgehogs, but they also eat many of the same prey items (especially worms).

“The same food cannot be eaten twice. Badgers are both a predator and a species competing for food.”