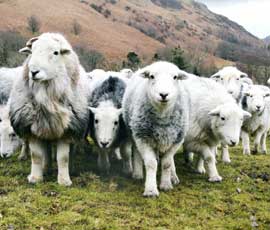 One of the Lake District’s most well-known fell farms is on track to achieve carbon-neutral status following a carbon and energy audit. But while the achievement suggests hill farming could lead the way in agriculture’s drive for energy conservation, it could also provide a valuable “green” marketing image for hill-bred livestock.

That’s the opinion of Sam and Candida Hodgson whose 1400ha Glencoyne Farm at Glenridding, Penrith, achieved a carbon emission rate of 0.06t/ha – a figure that compares with just over 10t/ha on four lowland dairy farms also audited by the North West Farming and Wildlife Group and is described as “an almost imperceptible carbon footprint.

“We’re here to farm, but working to maintain this fell environment is very important to us. The result of the carbon audit was certainly very encouraging, but I’m sure it focuses on the opportunity for hill farming in general to capitalise on its ethical and responsible approach to carbon emissions.

“There will definitely be plenty of other low-input farms like ours that have a very good carbon footprint so it’s something we all need to make more of in terms of the way we market and promote livestock bred in the hills,” says Mr Hodgson.

The audit analysed the farm’s energy usage and greenhouse gas production and concluded that while an upland livestock holding like Glencoyne Farm could be expected to have a low emission rate, the exceptionally low figure of 0.06t/ha indicates the farm has the potential to work towards becoming carbon neutral – a target FWAG says is still difficult to achieve on most livestock farms.

The figures showed the farm’s livestock were responsible for 96% of the CO2 emissions while energy use (diesel and electricity) contributed 4%. The 67ha of woodland on the farm sequestrated (removed from the atmosphere) an amount of CO2 equivalent to 90% of the farm’s C02 emissions.

The audit took account of fuel and electricity use, livestock and manure, nitrogen use, cropping and land-use changes.

The farm, which is owned by the National Trust, has fell grazing to about 2500ft. The 18ha of in-bye land – not all of which is mowable – runs down to the shore of Lake Ullswater. Entry into a range of environmental grazing management schemes have led to a reduction in sheep numbers over the 15 years since the Hodgsons took over the tenancy. The current sheep stocking rate is just under one ewe a hectare.

There are 1200 breeding ewes – comprising 400 Herdwicks, 700 Swaledales and 100 White-faced Woodlands – and the farm carries 32 Limousin-cross suckler cows and 15 head of youngstock.

“With a low stocking rate on the fell there are fewer sheep treading and opening up the peaty ground so there’s less oxidation and reduced carbon emissions. That’s not something we were actively aware of when we entered grazing schemes, but it’s something that’s having a beneficial impact beyond the improvement to the fell vegetation,” says Mr Hodgson.

While passionately committed to the environment at Glencoyne Farm, the Hodgsons admit they haven’t purposely set out to reduce the farm’s carbon footprint, but the outcome of the audit has encouraged them to look more closely at other carbon-friendly opportunities.

On a 40-acre farm they have purchased at Troutbeck, near Windermere they have installed a ground-source heat pump to generate enough power from below the ground to heat the farmhouse. And the fast-running beck that flows alongside the farmhouse at Glencoyne is also being considered as a source of generating hydro-electric power.

The audit has proved working with the landscape, using no fertiliser and trying to work with the land instead of against it, can lead to an almost carbon-neutral status. But this is not a farm that’s frozen in time or trying to be inefficient. Far from it.

“We may earn part of our income from environmental payments. but we’re still farming commercially and are deeply committed to producing the best stock we can from these fells,” says Mr Hodgson.

Agriculture has two key roles to play in energy conservation, says Jane Atkinson of the North West Farming and Wildlife Advisory Group which undertook the audit at Glencoyne Farm.

“As well as adapting to climate change, limiting future carbon emissions will be increasingly important for all farm businesses. Agriculture and forestry currently contributes about 7% of the UK’s greenhouse gas emissions, which are mainly the non-carbon dioxide gases of methane and nitrous oxide.

“Agriculture now has to reduce direct emissions of greenhouse gases by changes to animal waste management, providing renewable energy sources such as bio-fuels and providing low-energy raw materials to replace those based on fossil fuels,” says Ms Atkinson who agrees being “carbon-friendly is a marketable asset that hill farmers can benefit from as consumer awareness increases.

Carbon dioxide is released by burning fossil fuels during tractor use and while emissions at Glencoyne Farm are low compared with other emissions on the holding, the audit suggested there were opportunities to look more closely at the efficiency of fuel use such as:

• Reduce transport needs by being more efficient with journeys

• Turn off engines when not in use

• Regular servicing to ensure engines are running to maximum efficiency.

• Regular checks on all tyre pressures to ensure farm vehicles, tractors and machinery are working to their optimum efficiency to minimise fuel use

“There are currently no renewable energy sources in use at Glencoyne Farm, but they would greatly assist in achieving future carbon neutrality. Consideration should be given to renewable energy and could include generating hydro-electric power from the adjoining Glencoyne Beck,” suggests the FWAG audit.

EBLEX has also undertaken extensive research into reducing carbon emissions and the economic advantages for beef and sheep producers as well as meeting commitments to tackle levels of greenhouse gas. It has shown a 28p/kg improvement in sheep producers’ financial margin can be achieved when there’s a 1kg CO2 reduction in greenhouse gas emissions for every kg of liveweight.

• Consider further woodland/tree planting – the net CO2 emissions could be sequestered by planting a further 7.3ha of woodland.