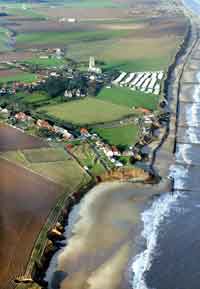 Coastal farmers, fighting against regulations that prevent them from maintaining sea defences, have been given a boost after a visit by DEFRA officials.

The landowners were members of the Blyth Estuary Group, which was set up to find a cost-effective way of funding repair work.

But they have been hampered by red tape and the cost of numerous permissions required before work could start.

The DEFRA visit was organised by the Country Land and Business Association to highlight the plight of the farmers.

The CLA has called on the government to help ease regulations preventing more landowners from funding repairs to sea defences.

“Mr Benyon was given a range of examples to illustrate the scope for locally initiated projects such as the one which has already been successful carried out at Bawdsey,” said CLA eastern region director Nicola Currie.

“In the past, each generation has done what it can to defend our coastline. By putting into action the coalition government’s localism agenda, coastal defence policy can be changed to enable a new way of working.”

Local landowners at Bawdsey financed their own repairs by donating farmland to a specially formed trust which then sold it to developers for housing. The scheme was approved by Suffolk Coastal District Council.

Money raised funded vital repair work to help protect a large area of land, villages and farms, as well as a 200-year-old Martello Tower. The idea is seen as a blueprint that could be used to fund repairs in other areas.

Mrs Currie said: “The government needs to make it as easy as possible for locally led projects to play their part and we look forward to helping Mr Benyon develop the ideas and suggestions in more detail.”