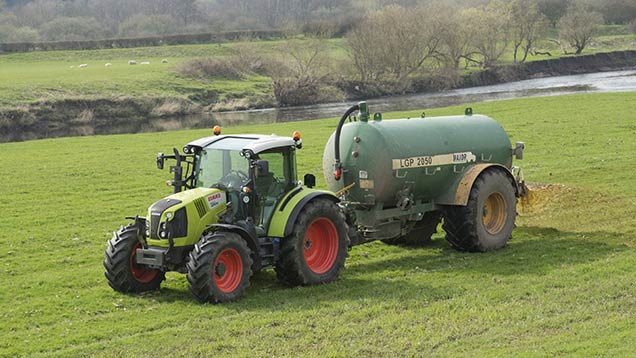 Defra has unveiled plans for a clamp down on water pollution from agriculture – with a particular focus on phosphates.

Good practice guidelines when spreading fertiliser will become mandatory, according to proposals contained in a government consultation document.

The consultation document says agriculture naturally has an impact on the water environment and acknowledges that many farmers already take action to reduce this impact.

But it warns that more needs to be done to protect and improve the water environment.

“The pollutants of most concern include the nutrients nitrogen and phosphorus, sediment, pesticides and faecal organisms from animal excreta,” says the document.

“These pollutants do not just harm the water environment but also impact on air quality, nature and wildlife,” it adds.

When spreading fertiliser, the proposals would make it mandatory to use a recommended system – such as RB209 or Planet – and properly calibrated and maintained machinery.

The new rules also include the requirement for field manure storage to be located at least 10m from the nearest watercourse.

Livestock producers would have to use a feed planning system that matches the nutrient content of diets to livestock feeding requirements.

Livestock feeders would have to be located at least 10m from any surface water or a wetland and severe poaching must be avoided where it is likely to pollute a watercourse.

Farmers would have to take action to prevent soil erosion and run-off from tramlines, rows, irrigation and high-risk sloping lands or those lands highly connected to surface water.

It would be an offence to spread more than 30cu m/ha of slurry or digestate or more than 8t/ha of poultry manure in a single application between 15 October and the end of February.

No repeat spreading would be allowed for 21 days.

The consultation document invites responses to the proposals. These will be considered before the government decides to introduce the new rules.

Diffuse water pollution from agriculture accounts for about 25% of all reasons for waterbodies not achieving the desired water quality, says the document.

In England, agriculture accounts for more than 50% of nitrate lost to the water environment, 25% of phosphorus, 75% of sediment and 80% of pesticides.

A Defra spokesman said: “Clean, healthy and plentiful water is vital for a thriving natural environment and a sustainable economy.

“That’s why we are consulting on simpler and fairer ways for farmers to reduce phosphates and other pollutants going into our rivers and lakes to help prevent damage to our wildlife and natural resources.

“We are already working with farmers and supporting them through agri-environment schemes to cut pollution by separating clean and dirty water, fencing off streams and roofing over silage and manure stores.

“We want to take this further by looking at more ways how to protect our precious soils, wildlife and water while boosting Britain’s economic growth.”

Consultation responses can be submitted until 24 November 2015.