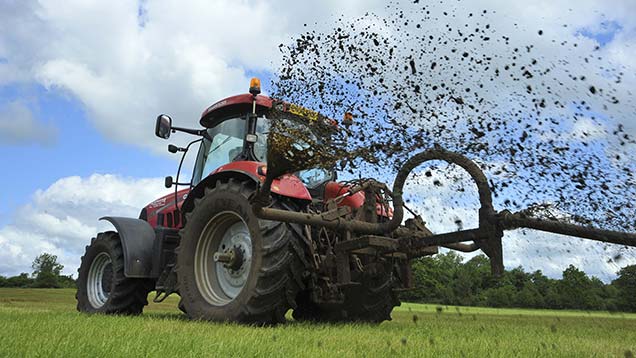 In the past two months, NRW confirmed its officers had dealt with two “major” slurry pollution incidents and a “serious” diesel spill.

The first spillage occurred on 11 May when slurry escaped into the Cywyn Rover, Carmarthshire.

The second happened just last week (31 May) when heavy rainfall caused slurry to run off land after spreading and into a nearby river in Pembrkshire, a spokesman revealed.

On 13 April, NWR said its officers also dealt with a diesel spill in Afon Tywi, Carmarthshire.

NWR said investigations were ongoing and it was too early to determine if the three incidents would lead to prosecution.

But it said the impact of all three could have been reduced had they been contacted earlier.

Phil Morgan, catchment co-ordinator at NRW, said: “We’ve been working closely with farmers for many years to ensure silage, slurry and agricultural fuel oil on farm is being stored appropriately. However, these recent incidents highlight there is still some work to be done.

“Prevention is much better than cure, but some incidents still happen. And if they do, the best thing any farmer or contractor can do is contact us immediately.

“We will then provide help and advice on how to prevent or reduce the environmental impact of the incident rather than spending time trying to identify the potential source.

“With many farmers now having cut silage, they will need to check their silage stores for leaks to make sure that no effluent is escaping from the farm.

“We also ask farmers and contractors to keep an eye on weather forecasts to plan slurry spreading operations when it’s dry so that they minimise the pollution risk and meet legal guidelines.”

NRW has produced a guidance leaflet (PDF version) to help explain the legal requirements within the Silage, Slurry and Agricultural Fuel Oil Regulations.

Meanwhile, farmers are being urged to report any incidents immediately by telephoning NRW on 0800 807 060.