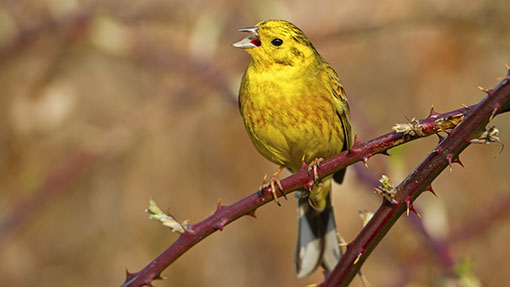 A bird survey of half a million acres of UK farmland has recorded 116 different bird species.

The results of the first year of the Game and Wildlife Conservation Trust’s Big Farmland Bird Count were published on Monday (14 April).

More than 500 farmers took part in the count from 1-7 February 2013, which included farms from every county in England, Wales, Scotland and Northern Ireland.

They were asked to spend half an hour recording the species and number of birds seen on one area of their farm.

Six of the top 25 most recorded species were on the Red List of Conservation concern – species that have suffered long-term declines. This included linnet, yellowhammer (pictured), hedge sparrow, tree sparrow, starling and lapwing.

The five birds spotted most were starling, woodpigeon, fieldfare, rook and chaffinch.

Starlings were seen on more than 40% of farms taking part and were the most abundant bird recorded in the survey.

More than 75% of farmers who participated were in some form of agri-environment scheme and the average farm size was 372ha.

Farms in Norfolk, Yorkshire, Hampshire, Cambridgeshire and Suffolk recorded the most number of birds.

But study authors believe the extreme wet weather during the week of the count, especially in the South and South West, was a major factor in farmers seeing fewer birds in those counties.

Jim Egan, from the GWCT’s Allerton Project, said: “We were delighted with the range of species people counted – 116 different species is really impressive.

“The total and types of birds shows there are some keen ornithologists out there among our farmers.

“It is pleasing that farmers recorded species on the Red List, but it doesn’t mean there is not a problem with the number of farmland birds.”

He added: “Changing farming practices have undoubtedly contributed to the decline in bird numbers on farms.

“Some species have increased in number, whereas others have gone down. There is a change in the distribution of birds.”

Mr Egan said the survey was not a scientific survey, but its aim was to give farmers ownership.

“They have spent years being told the decline in farmland birds is their fault.

“But there has been an enormous sea-change in the way many farmers now manage their land to benefit wildlife and we wanted to give them an opportunity to showcase what their conservation efforts deliver on the ground.

“The results demonstrate that farmers, who manage the largest songbird habitat in the country, can make a difference.”

The GWCT hopes the annual count will become a regular fixture in the farming calendar. The second count will take place during the week of 7-15 February 2015. For more information visit GWCT’s website or contact Morag Walker on 01425 651 000 or mwalker@gwct.org.uk

The Pitt brothers from Northamptonshire counted 1,320 birds in their 30-minute survey.

Mr Egan said: “With farmers like the Pitts doing their bit to help nature, we have every reason to believe the future could look much brighter for our precious wildlife.”