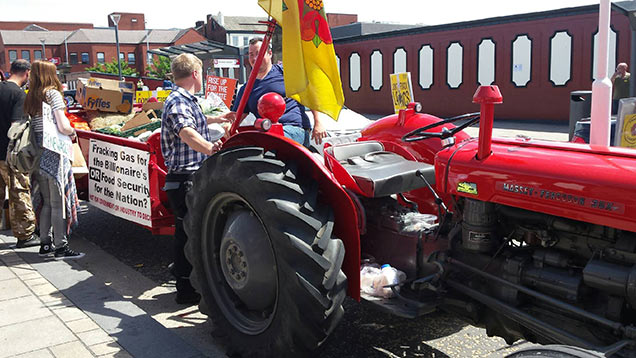 Farmers handed out free local produce to celebrate a council’s decision to reject plans by energy firm Cuadrilla to frack for shale gas in Lancashire.

Dozens of boxes of strawberries, vegetables and pints of milk – all produced by farmers in the county – were given to members of the public outside County Hall, Preston, on Monday (29 June).

Tony Holden, who runs an agriculture and heavy plants machinery business in the county, said the giveaway was a symbol of the stark choice the government has on food security in the UK.

“People have got to decide, do they want fracking gas that will provide about 5% of the country’s energy needs, or do they want fresh produce and food security,” said Mr Holden, the son of a 69-year-old Lancashire dairy farmer.

“Fracking for shale gas is not going to give us energy security. Renewables are the future.

“We are beginning to understand the health impacts from fracking.

“Studies show drilling can cause methane and other harmful chemicals, such as benzene, to migrate to aquifers.

“If we start fracking for gas, people are not going to want to eat fresh produce when they learn what it does.

“Fracking for shale gas is not going to give us energy security. Renewables are the future.”
Tony Holden, Lancashire farmer

Mr Holden drove a vintage tractor and a muckspreader to the protest on Monday.

Energy firm Cuadrilla’s application to frack at two sites between Preston and Blackpool was refused on grounds of noise and visual impact.

Lancashire County Council’s development control committee also voted down a separate application for the same site to enable Cuadrilla to monitor its operations because of the impact on the landscape.

Farmers who had spoken out against the plans handed out food to the public outside the county hall on Monday morning (29 June), ahead of the decision.

They are concerned about the potential environmental effects of allowing Cuadrilla to explore shale gas at Little Plumpton Farm and Roseacre Wood, near Blackpool.

Cuadrilla said it was “surprised and disappointed” by the council’s decision and would consider whether to launch an appeal.

Exploratory fracking for shale gas last took place in the UK in 2011.

But Cuadrilla halted its operations at the Preese Hall site in Lancashire after a study found it was “highly probable” it caused two minor earthquakes.

The Cuadrilla fracking applications in Lancashire were seen as a “test case” for shale gas exploration in the UK.

It remains to be seen how other county councils will react to other applications from energy companies seeking to frack for shale gas in other counties.