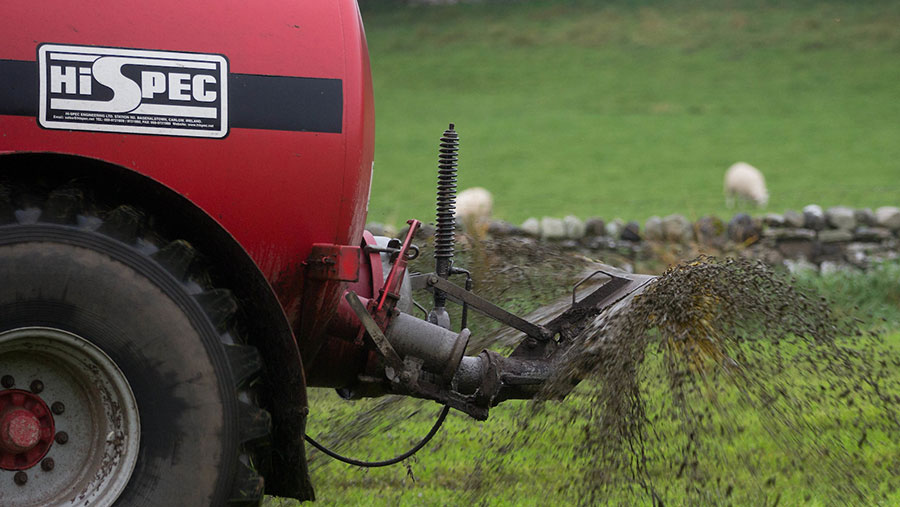 Strict and tighter limits will be imposed on ammonia emissions from agriculture under government plans to improve UK air quality.

Farmers and livestock producers face further restrictions on organic and inorganic fertiliser, including manures, slurries and nitrogen-rich chemicals and their application.

Environmental controls will be extended to large dairy farms by 2025 under the plan – similar to the permits already applied to intensive pig and poultry units.

The proposals are contained in the government’s Clean Air Strategy, which was launched by Defra secretary Michael Gove on Tuesday (22 May).

For the first time, the government will take concerted action to tackle ammonia from farming – which is responsible for 88% of ammonia emissions, says the document.

Farmers will be required to invest in the infrastructure and equipment necessary to reduce emissions – and supported to do so through a new system of public money for public goods.

The government says air pollution is the fourth biggest threat to public health after cancer, obesity and heart disease. Other industries will also face restrictions.

Mr Gove said: “We will work with businesses, farmers, industry and households to develop innovative new solutions to reduce emissions.”

The Country Land and Business Association said it was important any scheme provided genuine incentives to support farmers making the changes. CLA president Tim Breitmeyer said any system must provide flexibility and easy engagement for farmers alongside clear obligations for delivery.

He said: “We will consider carefully the proposals that require farmers to invest in any system or new infrastructure and equipment that helps deliver sustained improvements.”

But the Soil Association said the government’s plan for tackling air pollution failed to do enough to tackle serious ammonia emissions from farming.

Soil Association policy officer Honor Eldridge said: “If the UK is to improve its air quality, it is critical that we address all the causes of air pollution.

“While UK emissions of nitrogen oxides have fallen by about 70% due to measures to control air pollution in the last two decades, there have only been small decreases in ammonia emissions.”

Ms Eldridge said the government should support and promote a wider shift towards more extensive farming systems, such as organic grass-based systems with lower stocking densities.

The proposals are in addition to the government’s £3.5bn plan to reduce air pollution from road transport and diesel vehicles, set out in July last year.

Defra says the combined actions will reduce the costs of air pollution to society by an estimated £1bn/year by 2020, rising to £2.5bn every year from 2030.