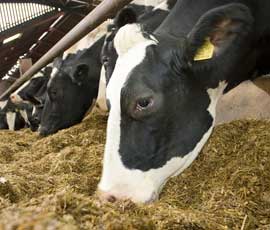 Continuously-housed dairy cows may have stimulated debate in the industry, but could it be the solution to tackling the issue of food security?

Chief scientific advisor to the government, Sir John Beddington, certainly didn’t dismiss the idea at last week’s British Society of Animal Science conference in Nottingham, where he explained the need for “sustainable intensification” to meet the growing demand for food.

“World food production must rise by 40% by 2030 to meet increasing demand, but we are not making any more land to do so.”

Prof Beddington explained how a transition was needed in agriculture to high-production, intensified and resilient systems, while at the same time remaining sustainable, with low emissions – in essence what he called “sustainable intensification”.

But Nottingham University’s Mike Wilkinson asked whether this increasing demand could be met with pasture-based systems and if cows should be housed inside or outside.

He explained how pasture-based systems restricted milk yields – often to 4-5,000 litres a cow a year, yet in mixed-housed grazing systems, such as those in the UK, they could be yielding 6-8,000 litres or as high as 10-12,000 litres in continuously-housed systems.

“High-quality pasture does not provide a balanced diet for milk production. Specifically, the concentrations of total and rumen-degradable nitrogenous components in grazed pasture are too high for optimum use by rumen microflora.” This means the efficiency of nitrogen use by the grazing cow is typically less than 20%.

But when faced with a decreasing number of dairy units, increasing herd sizes and increasing yields, continuous housing looks like a more favourable solution to meeting the demands.

And as Dr Wilkinson argued, continuous housing of dairy cows doesn’t necessarily equal poor welfare. “Welfare is a challenge for all dairy operators, regardless of size,” he said. But he did express concern that continuously-housed cows may not be able to show normal behaviour, although he said “normal” behaviour did not always equate to “ideal” behaviour, which varies according to human perception.

“Solving problems with one aspect of animal behaviour may create problems with another. For example, grazing may be more natural for cows, but it may deprive the animal of shade and create periods of hunger and heat stress in times of drought.” And considering the issue of climate change, the aforementioned could become an increasing issue for grazing cows, he said.

He also said there were options for continuously-housed cows to reduce carbon emissions, with opportunities for carbon capture and storage through technologies such as anaerobic digestion and collection of gases from buildings.

But in order for the welfare of cows to be met in continuously-housed systems, Dr Wilkinson expressed the need for detailed specifications on recommended environments for continuous housing.

“Welfare standards are underpinned by the skills of the stockperson, and the production system itself does not relate directly to health and welfare of the cow. Better advice is needed to allow the industry to understand the health and welfare consequences of different housing practices and to manage the conflicting issues they create.”

Do you have an opinion on large-scale dairies and continuously-housed cows? Post a comment on our forums or read more from the BSAS conference, including the financial benefits of CT scanning elite sheep