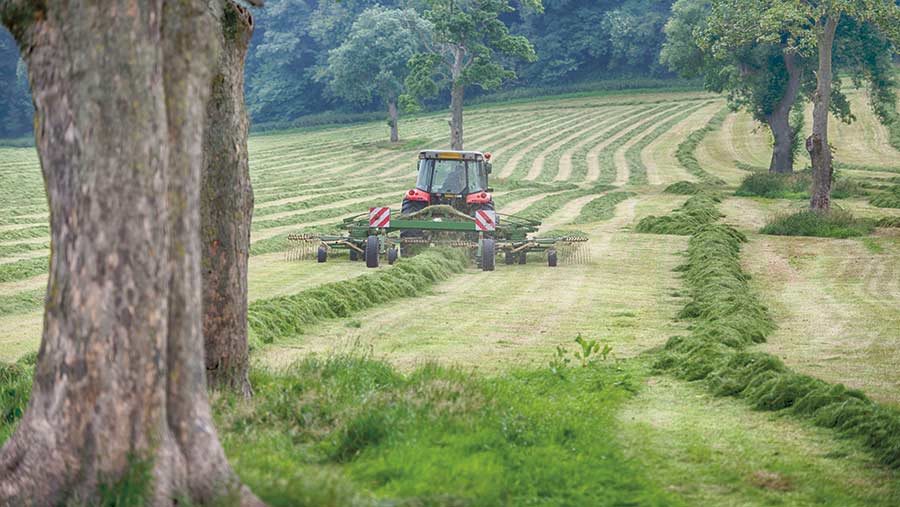 Farmers have found they can increase productivity and improve the visual appeal of the landscape by introducing trees into their farming systems.

Producers who have dipped a toe into the world of agroforestry are reporting back that the benefits of planting trees on a farm far outweigh any downsides and can work well as part of a commercial farming operation.

However, they highlight there is a need for specialist advice and support to help them manage the trees in the right way at the right time, as farmers’ knowledge of woodland management can be limited.

There is also a need for the government to recognise the role trees can play within a farming system and introduce policies that support and encourage the adoption of agroforestry techniques.

See also: Advice on how to plant trees on your farm

Over the past two years, James Thomas from Haywood Oaks Farm, in Nottinghamshire, has planted about 3ha of trees to help reduce soil erosion on his family’s farm.

The farm, which produces root crops, in addition to cereals and maize, is on sandland, which was washing right off the field during intense rain showers. Wind erosion was an additional problem.

With the support of the Woodland Trust, which provided the farm with subsidised trees, guards, stakes and advice, Mr Thomas has established a series of new tree belts in problem areas.

The trees are working to bind the soil together and increase infiltration rates, which in turn has eliminated the soil erosion, he says.

Stephen Briggs, a tenant farmer on a 15-year farm business tenancy with Cambridgeshire County Council has gone further, establishing 4,500 fruit trees across 52ha of arable land, which is the largest example of agroforestry in the UK.

The system has been designed so there is a 27m space between each row of trees, with a 3m pollen and nectar strip under each tree, leaving a 24m-wide alley for cereal cropping to fit in with modern farm machinery.

Mr Briggs says a key objective was to reduce the wind at ground level to reduce the amount of soil erosion, as it was unacceptable to him his most precious resource was being blown from his fields.

He chose fruit trees because he needed an economic return within the timeframe of his tenancy. They also had the advantage of keeping the status of the land as agricultural, meaning that eligibility for the Basic Payment Scheme remains unchanged.

“The fruit trees are now in full production and the yields from our fruit crop are about the same as for the cereals. But I can add significantly more value to the fruit crop in terms of processing it,” he says.

“Agroforestry won’t suit all farms, but it is certainly an options for some – either on part of the land or a greater proportion of it.

“For me, it offers a chance to mitigate climate change, it opens up new markets, it changes us from a high-risk monoculture to a mixed system – but one that is simple and one from which I can make money.”

Andrew Barbour, who farms at Pitlochry, in Perthshire, has been introducing more trees into his system over the past decade.

The bulk of the farm is 1,000ft above sea level and has a very short growing season, so he was looking for ways to advance grass growth early in March, April and May.

Since 2009 he has planted six new blocks of pastoral woodland, which not only provide shelter for the stock – helping to improve lamb survival but also give him the early grass he requires, as the trees help to raise soil temperatures and moisture.

“You can already see the benefits on the site from an early grass growth point of view,” he says.

“But there is another aspect that is really crucial for us and that is reducing the winter feeding requirements for the ewes and if you can save on feed costs that is real pounds, shillings and pence.

“If you can get the ewe in the right condition for the start of lambing that is one of the best things you can do to keep the lamb alive.”

Paul and Nicola Renison, who farm in Cumbria on the edge of the North Pennines, have recently implemented a programme of planting 3m-wide hedgerows, including trees, to improve the shelter for their sheep flock.

They also run a mob-grazing system, so dividing fields with new hedges is helping them to rotate their grazing more effectively

The couple run about 1,000 cross-bred sheep and their goal is to move towards 100% outside lambing.

This is challenging because of a local phenomenon called the Helm Wind – a strong north-easterly wind which can prove deadly to young lambs if caught out in an exposed area.

But if they can keep more lambs alive, then this will increase profits.

“The other thing that the trees are going to do is give us deep roots, which will help with water infiltration in a wet period during the winter,” says Mr Renison. “That will hopefully have benefits further down the hill.”

David Brass, who runs The Lakes Free Range Egg Company based in Penrith, Cumbria, started planting trees in 1997 and reckons he has seen clear financial benefits as a result.

He originally introduced trees to encourage the birds to go outside to range, because of their inclination to head for sheltered areas.

However, he discovered – and it has since been proven scientifically – that trees have lowered mortality and disease levels within his flocks, while improving welfare which has helped to increase production and egg quality.

The eggs are also marketed as “woodland eggs” – attracting a premium.

For a 16,000-bird unit, he estimates he is £3,000/year better off as a result of planting trees – about the same amount of money it costs to plant the trees in the first place.

“If I had to give advice to a farm, particularly one rearing chickens, it would be plant more trees. The benefits far outweigh any downsides of having to look after them, or taking bits out of your farm.”

Mr Brass says other benefits include reducing ammonia emissions from poultry systems – which can be a barrier to getting planning permission.

“Planners can sometimes have problems with emissions of ammonia coming from poultry sheds, so they refuse planning. However, the trees absorb that, so it doesn’t go out of the site.”

‘Bring agroforesty into the mainstream’

The farmers were all speakers at the Agroforestry 2017 conference organised by the Woodland Trust, Soil Association, and the Royal Forestry Society, held at Cranfield University, Bedfordshire.

Addressing the conference, chief executive of the Woodland Trust, Beccy Speight, acknowledged agroforestry had for a long time been seen as something on the “hippy-fringe”.

However, it was now time to get beyond that image and move the idea of integrating trees with agriculture into the mainstream.

“Agroforestry needs to be a mainstream component of a new fully integrated land management policy,” she said.

“Collectively, we must secure polices that prevent trees on farms from continuing to fall through the cracks.

“We are calling on the government to take a new and ambitious approach which tackles administrative blockages, harnesses innovative sources of funding and properly reflects the valuable interplay between trees, woods, forestry, farming and the environment.”

The grant has two payment types: a capital grant for initial establishment and then an annual maintenance grant that is paid for five years. For a wood with a planting density of 400 trees/ha the initial payment is £3,600/ha and the maintenance grant is £84/ha.

Wales – The agroforestry option under the Glastir Woodland Creation scheme offers financial support to establish 80 scattered trees per hectare on permanent grassland which is used for grazing.

The initial capital payment is £1,600/ha with an annual maintenance payment, for five years of £30/ha.

Applicants will need to show this option is intended to support the establishment of a new agricultural system – it cannot be used just a tree-planting grant.

England – The situation here is confusing and unsatisfactory, according to the Woodland Trust.

Defra has chosen not to implement any agroforestry options under its Rural Development Programme, with the policy regimes for agriculture, forestry and nature conservation all kept separate.

The Countryside Stewardship scheme offers some support for hedgerow planting and limited tree planting up to 100 trees/ha.

There is also the Woodland Creation Scheme, but planting trees under this scheme means the land planted is no longer eligible for the Basic Payment Scheme – which does put farmers off.

To bridge the gap, the Woodland Trust offers free advice and support to farmers interested in introducing agroforestry to their system. They also offer small-scale funding packages covering the costs of trees and guards for eligible projects.

To find out more, see the Woodland Trust’s web page on large-scale planting of trees.