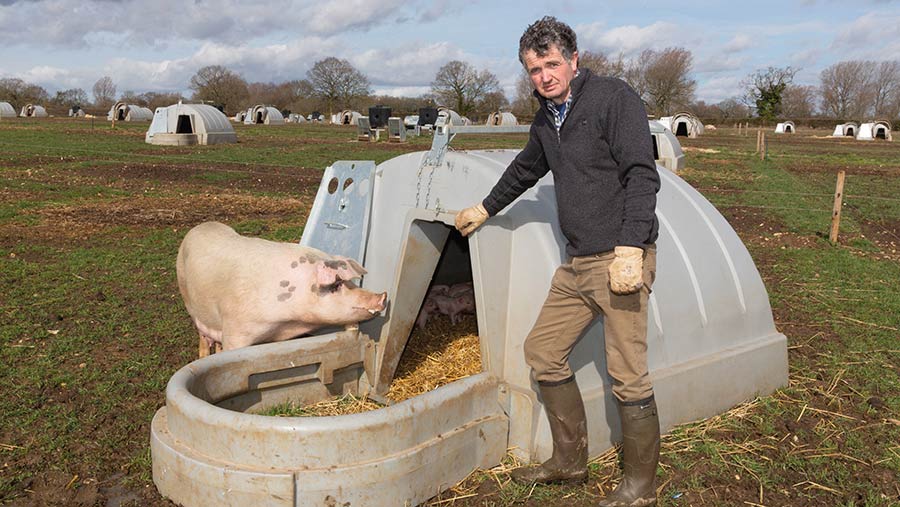 The trials are investigating the effects of establishing grass cover crops before sows are moved onto the land.

Manager of both breeding sow units, Rob McGregor of LSB Pigs, says he has already seen a variety of benefits in the first year since trials started.

See also: How do field beans and forage stack up in pig diets?

“We’re comparing three grass cover mixes across two sites, aiming to find out how well they establish, their persistence and ability to cope with pigs grazing.

“We are also looking at soil structure and nutrient retention and pig performance,” explains Mr McGregor.

“On the first site, the specialist pig mix swards have thickened up and performed well throughout the year.

“The creeping fescue included in the mix seems to be of particular benefit,” says Mr McGregor.

“The traditional fallow mix hasn’t tillered or spread as well between the rows, and the clover and bird’s foot trefoil in the mix slowed in the autumn.

“There is still about 75% of the ground with cover; it has just been lost around the feed troughs,” he says.

On both sites, the cover mixes were planted in mid to late August 2020 and pigs were moved onto them between late January and early February 2021, once the covers were established.

All the sward mixes are quick growing, as producers’ lead-in time can be short before moving pigs onto a site.

Mr McGregor and his team drilled the covers as the landlord did not have spare resource at the time, and all three crops established well.

Overall, the second site’s covers have not persisted as well.

“The land is not as well drained and it’s the first time we’ve put pigs on there, so we have yet to learn about it fully,” he says.

“There is probably a soil pan beneath the surface as it seems to cap easily, with water held in the top 12-15cm, perhaps because the ground has lacked deeper cultivation in recent years.”

The area planted with the herbal mix has retained the grass species and quite a few of the individual farrowing paddocks have enough cover to regenerate in spring.

But the chicory in the mix has now gone, although it grew well in the summer.

Most of the herbal cover has been lost where there is greater stock pressure. From what the team has seen to date, a 25% differential in stocking rate is enough to make a difference.

The grass covers are generating more biodiversity, including frogs, toads and birdlife, as a natural feeding cycle is established.

Soil erosion has also been cut. All the covers slow surface run-off and get water into the ground more quickly.

On the first site, where land is light and covers are thicker, there is no surface water or erosion on the paddocks.

This, in turn, has benefited staff at the unit because without water gullies and mud, the site has become a more pleasant environment to work in.

Sows are much more settled and contented when grazing is available. Any niggly or pushy sow behaviour has completely gone since they moved onto grass cover, Mr McGregor reports.

The herd is also visibly fitter because of the amount of walking they do while grazing. They cover the whole paddock, and it has made a big difference at farrowing.

Sows farrow more easily and get up and about much more effortlessly afterwards.

Herd performance at the first trial site has been the highest in 27 years over the past 12 months, with 100% of sows in-pig after the second pregnancy scan.

Mr McGregor thinks that grass cover has certainly contributed to that improvement, although other management factors are involved.

Mr McGregor highlights that the cover crop needs time to establish over autumn.

That means pigs need to be moved onto it between January and March, when daylight hours are short, as opposed to the autumn, when pigs can be moved straight onto stubble.

To help with work patterns in the shorter daylight hours, posts can be put in the ground pre-Christmas ahead of movement to the new site, to spread the workload.

Following crop options can be limited. On the two trial sites, the pigs will be followed by sugar beet. In other parts of the country, April is too late to plant a spring cereal crop.

That means working together with landlords to achieve the most mutual benefit for pigs and the arable rotation is key.

Ideally, producers and landlords need to plan where pigs will go at least two years ahead.

Pigs could potentially follow a two-year fallow mix, which can be funded by Countryside Stewardship schemes, Mr McGregor suggests.

Trial partners are looking at developing a sward mix that could meet the aims of the schemes and work well under outdoor pigs.

To help maintain cover swards and achieve optimal benefits, stocking rates might need to reduce from four sows a hectare (10 sows an acre) to 2.4-2.8 sows a hectare (6-7 an acre), suggests Mr McGregor.

However, he says it depends greatly on soil type and condition and sward mix.

A paddock-flipping system allows grass to be rested © Rob McGregor

Paddocks can also be “flipped”, giving alternate paddocks a period of about nine weeks to rest, to help the cover rejuvenate and last longer.

Trial partner organisations will continue to take soil samples in the coming months.

They will look at any differences between the impact of the cover mixes on soil structure, nitrogen retention and worm counts, as well as measuring the impact on water quality.

Grass covers are one way pig producers can mitigate the risks of nutrient leaching into water courses and depleting soil resources for following crops.

Plant cover helps to reduce run-off and erosion and the roots bind the soil to retain nutrients and structure.

The first site is on light soil, with two grass cover mixes after winter barley. There were 8ha of a specialist pig mix and 8ha of a traditional fallow mix.

The second site is on medium light soil and was planted with 10ha of the same specialist pig mix as site one and 10ha of a herbal mix, following winter wheat.