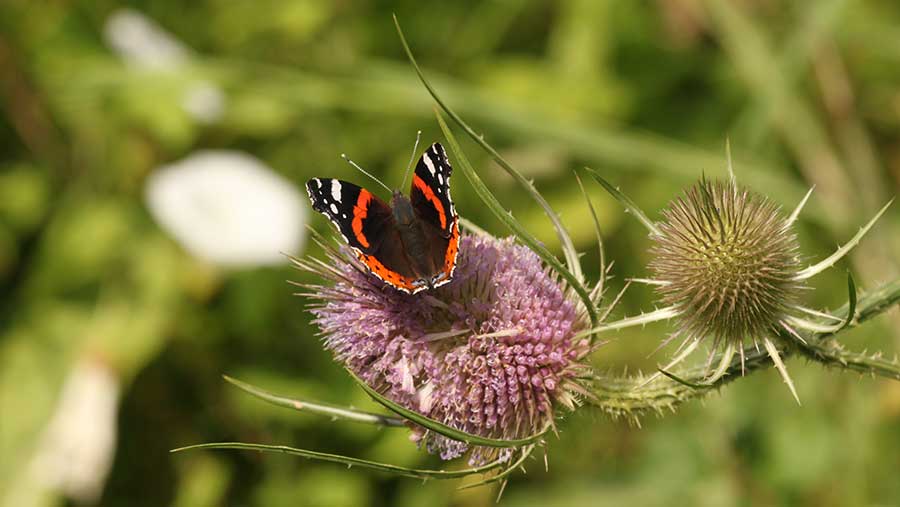 Farmers are looking at ways to tie environmental practices into commercial operations without affecting their bottom line, as the Basic Payment Scheme is phased out in favour of providing public goods to qualify for payments.

Over the next seven years, BPS payments are being replaced by the new Environmental Land Management (ELM) support system, which sees the emphasis move towards environmental outcomes.

However, farmers face the challenge of finding ways to promote wildlife without sacrificing arable profits.

One major wildflife charity has shown that it is possible to do this on its commercial farm 10 miles north west of Cambridge. 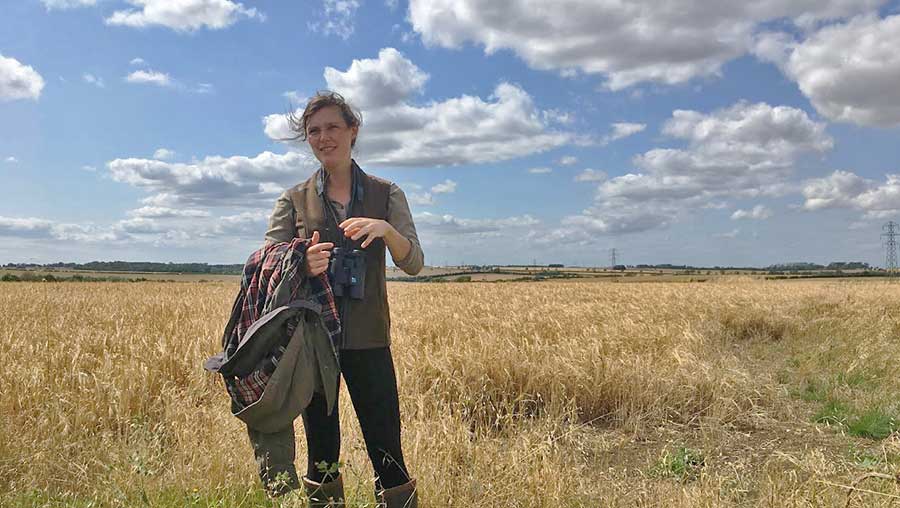 At the RSPB’s Hope Farm, farm manager Georgina Bray is successfully marrying the two, generating a net margin of £133/ha without BPS or conservation income.

It’s an approach that has evolved over 20 years at Hope Farm, which has operated as a commercial arable venture alongside conservation projects aimed at unifying profitable farming and a healthy wildlife population.

Policy makers have already shown interest in Hope Farm as a basis on which to design future farming policy. So how is she going about it?

Spread across 181ha, Hope Farm has been owned by the RSPB since 2000, and has been run as a commercial arable business with 15% of the area set aside for conservation.

Miss Bray has been working on the farm for three and a half years and running operations for the past 18 months. Since taking the helm, she has started to introduce direct drilling, gone insecticide free, and has continued to enhance wildlife habitats and run research projects.

“The aim from the start was to maintain a stable profit while changing the habitat management and leaving the farming to our contractor, but over the past three years we have started to focus more on how the cropped land can support biodiversity, particularly beneficial invertebrates,” she explains.

The farm has always been contract farmed and since 2018, a local contractor, Martin Lines, has worked with Miss Bray to make a number of changes.

As chair of the Nature Friendly Faming Network, Mr Lines was already experienced at direct drilling and operating insecticide free, which tied in with Miss Bray’s plans. 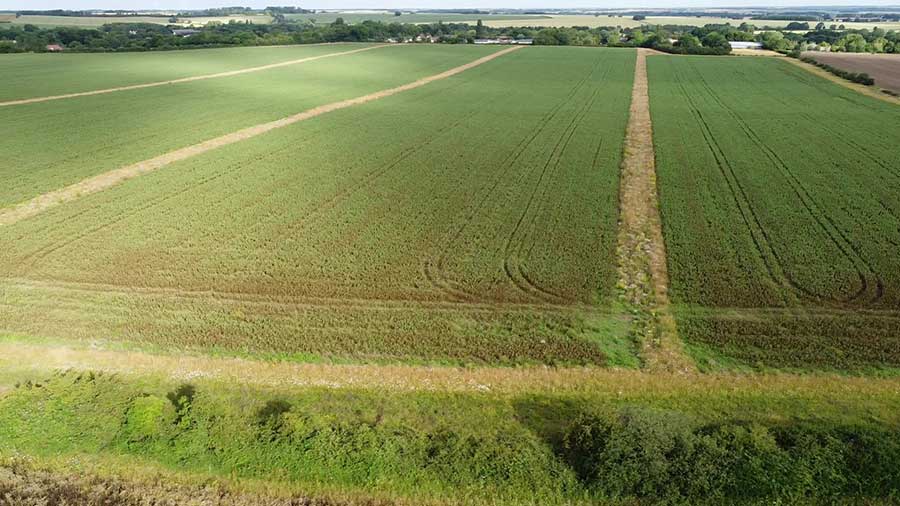 Wildflower corridors running across a field of wheat

“Martin has invested a lot in machinery, and soil health has been a big focus in the past few years as the farm has a background issue of blackgrass on its heavy clay soils,” she says.

Together, they have examined long-term sustainable profits, added crops to the rotation and focused on cultivations to improve soil health.

The rotation consists mainly of winter beans, plus spring barley, winter barley, oilseed rape, winter wheat, spring wheat and millet, which was introduced in 2017 to sell as RSPB bird food.

Cover crop mixes are also grown as part of trials to determine what works best for both the main crops and the wildlife.

“It’s been slightly easier to figure out what works on lighter soils, but we are starting to get to grips with what works better across the farm,” explains Miss Bray.

Black oats and phacelia have worked especially well as a basic mix, but vetches, clovers and mustards have been included in some of the mixes more recently.

“We grow a real diversity so that we are capturing all the nutrients at different parts of the soil profile, and to provide different benefits for the crops.” 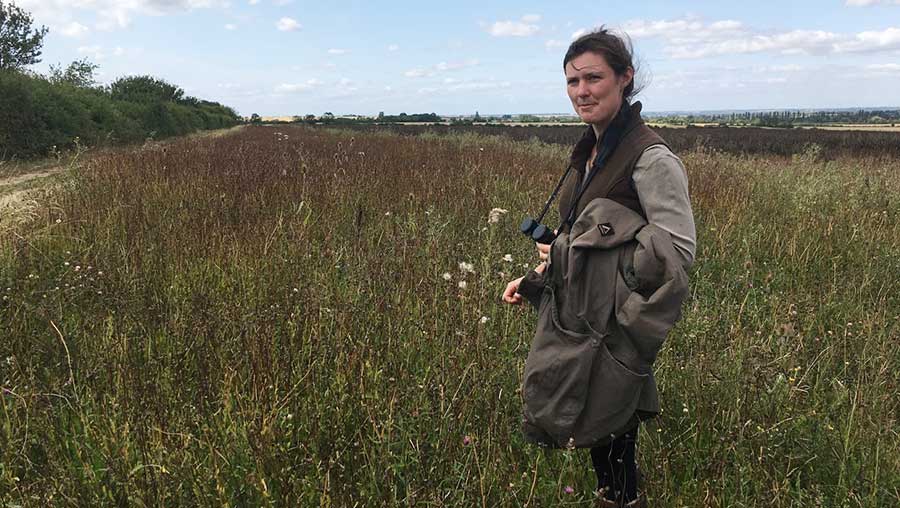 For example, black oats are hardy and good ahead of broad-leaved crops, but not spring barley as they hamper its growth. Vetches and phacelia are good for the top few inches of the soil structure and don’t lock up the nutrients.

In 2018, when some winter beans didn’t look good, they were instead used as a cover crop with spring barley drilled straight into them.

“The spring barley looked so good, got away quickly and we hardly had to use any nitrogen on it.”

The attitude towards oilseed rape is also one of low input, low cost – so if the crop looks poor it can be used as a cover crop, keeping green cover and holding nutrients.

The farm has been trialling habitat management for several years, with wildflower margins and seed mixes first sown in 2002.

Cutting and baling has been a great strategy to prevent grasses overtaking wildflower growth in the long term, explains Miss Bray.

“We found that by lightly cultivating every other year in February, the margins have a great abundance and diversity of wildflowers.” 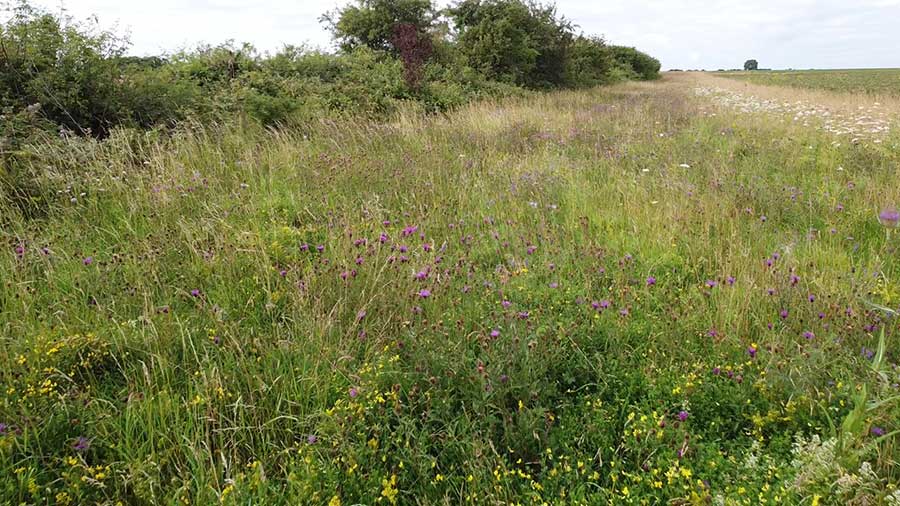 Wildflower margins were first sown at the farm in 2002

Winter beans offer a good nesting habitat for birds like lapwings; they also provide pollinator resources and have allowed the farm to cut its nitrogen usage by around 40kg/ha.

In 2019, the farm went completely insecticide free and saw no reduction in yields compared with previous years, making small savings on the products.

“This was important as insecticides can interfere with beneficial insects and birds’ food source,” says Miss Bray.

“Though we had aphids in the beans last year, there were loads of ladybirds and larvae too, and within 10 days there were only ladybirds left and the beans didn’t suffer at all,” she explains.

From a cabbage stem flea beetle perspective, oilseed rape has fared much better in fields grown with cover crops and green compost compared to those without.

In addition, in 2020 Miss Bray noticed through digging holes and soil tests, that the structure looks better where cover crops have been grown, carbon levels are slightly elevated and worm counts are higher.

Focusing on soil health through cover crops and reduced cultivation paid off in 2019 when, despite the wet autumn, there was little standing water on the fields, and the aerated soil was in good enough condition for contractors to get onto the land in January.

“This was the difference between establishing a winter wheat crop or having to resort to expensive spring cereal seed or leave fallow,” she explains

Ponds have also been created within existing ditches to provide more wet features, which act both as a wildlife habitat and as buffers to prevent nutrient leaching.

“We try to get lots of diversity in wildlife and cropping while connecting the habitats up, so these all work together,” says Miss Bray.

Stewardship schemes have played a role in supporting conservation on farm since 2007.

“They offer a reliable income and mean we roughly know what our spending and costs will be each year,” explains Miss Bray. “Some habitats are a direct cost, but there are a lot of indirect benefits – especially for in-field management.” 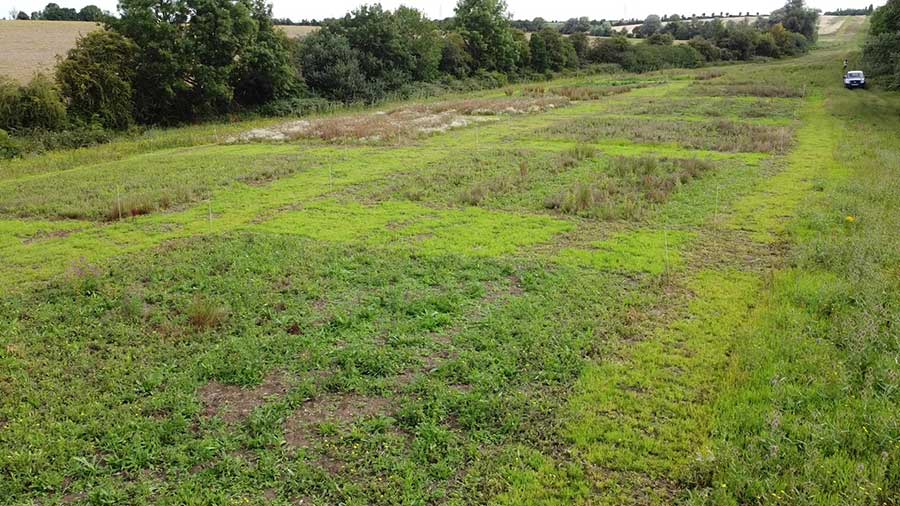 “Though there is a lot farmers can do voluntarily, there needs to be financial support as it does complicate a business and conservation needs enough money behind it to produce good quality habitats.”

Farm profits are split between the farm and the farm contractor, with the farm receiving a fixed return after production costs are deducted from the cropping income.

After this fixed return, the divisible surplus is split between the RSPB and the contractor 35:65.

Despite taking more than 15% of the land out of production the farm maintains a similar profit to before – even without including the conservation income.

In 2019, Miss Bray benchmarked against other local farm businesses and though crops varied in profitability, this was typical compared to the other farms. The exercise was so useful that she plans on doing it in future years.

As well as continually working to improve soils, the farm is planting wildflower corridors through fields to increase access to beneficial insects, compost spreading and sowing cover crops as part of the Centre of Ecology and Hydrology and Rothamsted Research’s Achieving Sustainable Agricultural Systems programme.

But reducing the farm’s carbon footprint is the next target for Miss Bray.

“We have run a few carbon audits to see how we compare. It’s shown how much better we could be in terms of emissions, through using less inorganic nitrogen, increased cover crops and continued reduction in cultivations,” she explains.

“We are trying to move to all direct drilling and are at about a halfway point at the moment.”