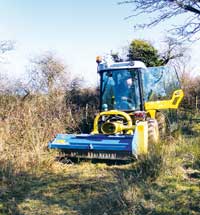 Many farms have a field corner or area of pasture that is too wet and boggy to graze profitably, often with the result it is fenced off or abandoned. But these wetland areas provide a precious habitat for flora and fauna and, managed correctly, can become a valuable asset to the farm.

At a recent farm walk in Hartland, Devon, livestock producers discovered how to manage Culm grassland to the benefit of the farm and the environment. Also known as Rhos pasture, the wetland can be found across the south west, Wales and Scotland, and is managed in a similar way to other wet grassland areas.

But no matter how much drainage is provided or how much fertiliser is thrown at it, this will never be good quality pasture, said Craig Hodgson, farm conservation adviser with the Farming and Wildlife Advisory Group (FWAG).

Areas which have become overgrown must be cleared of willow, brambles and gorse – usually by hand – followed by burning or grazing to return it to usable pasture. Mechanical cutting using low-impact machinery is another alternative.

“Burning can be a valuable and cost-effective tool but you must comply with the rules and ideally burn from the end of December to the end of February. The key is then to get some cattle or ponies onto the land, with the right stocking density, which will graze it to produce a diversity of sward height.”

Grazing at different times of year would also help different seed types to set. Where soft rush was a particular problem, heavy topping in spring, summer and autumn or targeted weed sprays could prove effective.

Rather than fencing areas off, farmers could leave wet corners as part of an improved field, enabling livestock to graze both types of pasture, he added. Alternatively, they could leave it enclosed and graze for a shorter period of time.

“You have to get the stocking balance right so it doesn’t get damaged – usually about one livestock unit a hectare is ideal, but each site is different, so you do have to play it by ear.”

Simon Berry, grazing officer at the Devon Wildlife Trust, which is linking up scattered areas of Culm grassland, said native cattle and pony breeds were best, as they were less choosy about what they ate and performed better in the difficult conditions.

“Ruby Red Devons, Aberdeen Angus and Dexters are better at digesting hard material, but they are slower growing, so you need a specific market for them.”

Wetland areas were considered extremely valuable in the Higher Level Stewardship Scheme and, by joining, farmers could turn a former wasteland into profitable, and environmentally valuable, parts of their system.

The Heards keep 32 Limousin cross suckler cows at Deptford Farm, Hartland, Devon, where a third of the farm is Culm grassland.

Working with FWAG and the Devon Wildlife Trust, they have reintroduced grazing, cleared overgrown areas and planted or laid 7.5km of hedge to link rare habitats. “It’s about keeping the continuity of habitat across the landscape,” said Mr Heard.

“It was quite an immense task to get into these areas and start opening them up. And once they are cleared you have to keep on top of them as they will grow back quickly. You have to take a small, manageable chunk – don’t try to do it all in one go.”

He now grazes his suckler cows with calves at foot on the Culm grassland between May and September, allowing them access to improved pasture to avoid over-grazing and health problems. “The land is also good at controlling the condition of dry cows which are prone to getting fat.”

Liver fluke is another problem to be aware of. “Some cattle build up their own immunity, but many will need to be treated. Speak to your vet before grazing wetland areas so that you’re aware of the potential risks.”