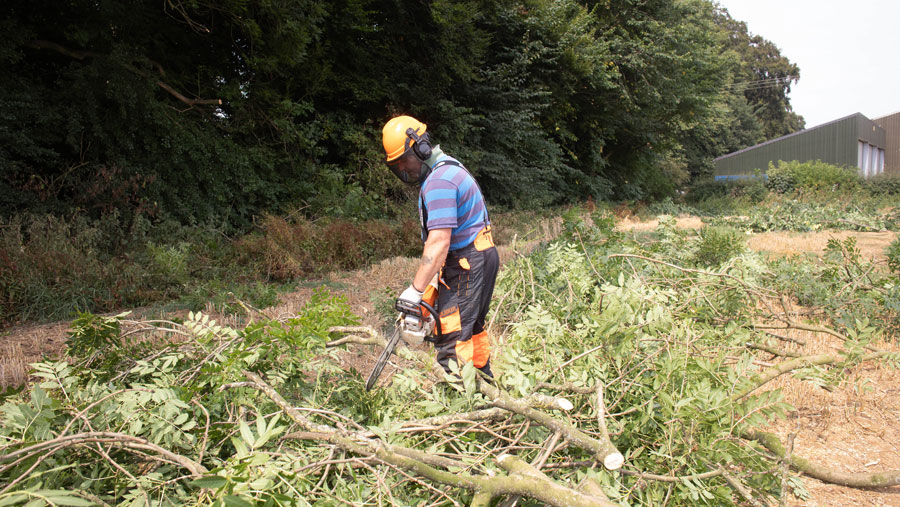 Grants of up to £5,000 are being made available to English farmers and landowners who restock trees under Defra’s new Tree Health Pilot scheme, which is now open for expressions of interest.

The scheme is part of a broad new range of policies being developed by government to reward rural businesses for improving the environment, in this case by removing and replacing diseased or pest-ridden trees on their land.

The pilot is due to run until 2024, and Defra is looking to invite around 100 applications from those who submit an expression of interest.

The initial focus is on ash, sweet chestnut, larch and spruce in specific geographical regions, namely parts of the North West, West Midlands, London and the South East of England.

It will be delivered by the Forestry Commission and will support the felling and restocking of trees, as well as providing maintenance payments for restocked sites (see panel below).

The pilot will work alongside the existing Countryside Stewardship Woodland Tree Health grants, which will continue to be on offer until 2024, though farmers and landowners who are already receiving grants under this scheme will not be able to apply for the pilot as well.

Grants under the Tree Health Pilot may be used to pay back some of the costs of:

The rates will vary according to tree type and activity, and may be based on a percentage of actual cost or a standard cost.

For ash dieback, for example, up to £5,000/ha will be available for restocking ancient woodlands, or £3,900/ha for other sites, plus £200/ha annually for maintenance. For trees outside of woodlands (for example, in a hedge) the scheme will pay £240 to replace a large tree, or £2.99 for whips.

For larch with Phytophthora ramorum, Defra may pay £260-£1,680/ha dependent on how the trees are felled, and up to £5,000/ha for restocking as part of a group application.

Results from the pilot will help inform the full Tree Health Scheme, due for launch in 2024, and will trial new elements. These include dealing with diseased and infested trees outside of woodland, removing roadside ash with ash dieback, and trees affected by the spruce bark beetle and sweet chestnut blight.

Prof Nicola Spence, the UK’s chief plant health officer, encouraged eligible stakeholders to submit their expressions of interest – either as an individual or as a group – “to help us protect these vital national assets”.

“Plants and trees deliver £10.5bn a year in social, environmental and economic benefits, from providing a safe environment for wildlife and sequestering carbon from the atmosphere, to enabling a sustainable timber industry,” she said.

If invited to submit an application, farmers and landowners will first be visited by a Forestry Commission inspector to assess the proposal.

If they then find a notifiable disease or pest, they will issue a Statutory Plant Health Notice, which will oblige the applicant to deal with the problem, whether they then receive a grant or not.

Full details about the Tree Health Pilot are available online where farmers and landowners can also submit expressions of interest.