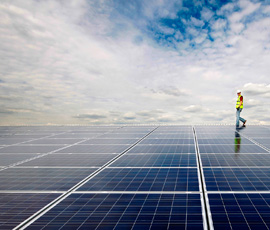 A Pembrokeshire farm has been earmarked as a potential site for a £20m solar park with 60,000 panels.

German firm Kronos Solar has applied for permission to develop a 13 mega watt solar park on 27 hectares of land at West Farm, Cosheston, near Pembroke.

If approved the development would be one of the largest solar parks in Wales.

Kronos Solar director Alexander Arache said the development would not sacrifice good quality farmland as the area in question is considered to be low-grade land.

The company already has installations in Cornwall and the Isle of Wight, but this would be their first in Wales.

It had considered several possible sites in Wales but West Farm, currently a mixed farm, was identified as the best site. “The great thing about its location is that it’s practically invisible from the surrounding areas, that’s why this site is so good,’’ said Mr Arache.

Although Kronos is not a British company, Mr Arache said the scheme would be backed by money from British sources such as pension funds.

“We hope people like the idea and so far the feedback has been very good.”

See the Renewables channel on FWi