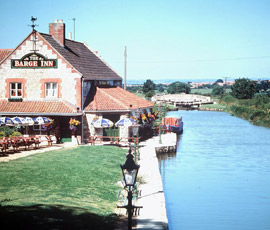 An investigation is under way after one of Britain’s most important trout rivers was polluted with a chemical widely used in agriculture.

The pesticide chlorpyrifos, an insecticide widely used on cereals, maize and grass, was found to have polluted a 15km (nine-mile) stretch of the river from Marlborough in Wiltshire to Hungerford in West Berkshire.

The Environment Agency said the chemical appears to have entered the river from the Marlborough Sewage Treatment Works.

It has wiped out aquatic insects on a stretch from the sewage treatment plant near Marlborough to Hungerford, but the concentration of the chemical is “low” and so far no fish have been found dead.

Paul Hudson, from the Environment Agency, said: “There are numerous locations and ways it could have entered the sewage treatment works before it reached the river, and we are appealing for any information anyone has about how this happened. “

The origin of the spill is unknown and could be either domestic or agricultural. Environment Agency officers are visiting businesses in the area that would use this product.

Farmers are working with the Environment Agency, Thames Water, local fisheries as well as other local organisations to identify the source of the pollution, which happened during the middle of the fly-fishing season.

Members of the farmer-led Marlborough Downs Nature Improvement Area (NIA) project have gone on alert to help track down how this substance, sometimes used to clear soil of crop pests, came to be found in the chalk river, a Site of Special Scientific Interest (SSSI).

Jemma Batten, project manager for the NIA, said: “Our farmers are making a major contribution to the health of our local wildlife.

“We are devastated at the news that the gorgeous River Kennet has suffered this major pollution incident. We as farmers understand the profound importance of handling chemicals responsibly. We do all we can to ensure the farming community is never the cause of such a serious event.”

Charlotte Hitchmough, director of Action for the River Kennet (ARK), added: “With a chemical like this, if disposed of inappropriately only a small amount can cause a great deal of damage to wildlife.

“With such a wide range of users, searching for the source will be a major challenge.”

Public Health England has advised people to keep pets away and avoid swimming, fishing or any other recreation in the river until levels have returned to normal.