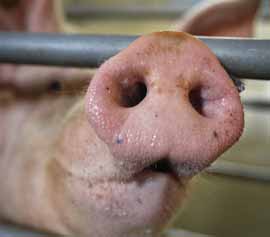 Proposals for a 2,500-sow pig farm in Foston in Lincolnshire are unlikely to be heard by planners until the autumn, it has emerged.

Plans for the so-called “mega-farm” had been expected to go before Derbyshire County Council next month. But it is understood the date will slip while additional information relating to the proposal is submitted and checked over.

Midland Pig Producers, the company submitting the plans, said it was waiting for the information it had been asked to produce – which related to groundwater pollution risks – to “go through the formal channels”.

It said it would be told of a new planning date later in the year, but it expected the date to be extended to late autumn because of the summer holidays.

The delay comes after the Soil Association held a public meeting against the development last week (27 June).

Soil Association policy director Peter Melchett told campaigners and local residents that giving the Foston site the go-ahead paved the way for a “new direction in British farming which is just wrong”.

“This is not about organic or non-organic,” he said. “And it’s not about finding ways to reduce imports, because this kind of farm won’t help that.

“What will give British pig producers a future is giving people really strong reasons to buy British. That doesn’t mean just saying there is high animal welfare, it needs to be more to get consumer loyalty.”

While welfare group Compassion in World Farming had said animals at the Foston site would have a higher welfare of living than many pigs in smaller units, Lord Melchett said the Soil Association still had concerns over the site’s welfare.

“The reason CIWF is not opposing as forcefully [to Foston] as their supporters want is because the pig farrowing crate can be expanded. While Foston says they won’t dock tails or clip teeth, our view is that pigs should spend at least part of their life outdoors.

“The Soil Association’s ‘Not in My Banger’ campaign is not about promoting organic, it’s about pigs being allowed to go outdoors and not being mutilated.”

Lord Melchett said while the association would continue to protest against the Foston unit, it was public opinion which would decide whether farmers continued to look to large-scale farming as an option for food production.

“What will make a difference is whether farmers think people will buy the product. All of farming’s future is being decided on what people will buy and at the end of the day, that’s a good thing for the industry.”