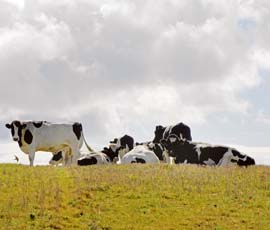 Scientists could soon be able to measure the exact amount of gas produced by livestock, allowing farmers to plan for low-carbon feeding regimes.

A study by the University of Bristol and the Teagasc Animal and Grassland Research Centre, Ireland, found a link between a compound – Archaeol – found in the faeces of ruminant animals, and methane production.

The compound is thought to come from organisms called archaea which live in the foregut of ruminant animals, and produce methane as a by-product of their metabolism.

Co-author Dr Fiona Gill, who worked as a post-doctoral researcher at Bristol, and now works at the University of Leeds, said: “We’re quite good at measuring man-made CO² emissions, but techniques to measure the animal production of methane have serious limitations.

“If we can identify a simple biomarker for methane production in animal stools, then we can use this, along with information on diet and animal population numbers, to estimate their total contribution to global methane levels.”

The study found the animals fed on as much silage as they wanted produced more methane and archaeol, than those fed on a fixed amount of silage with supplementary concentrates.

“This confirms that manipulating the diet of domestic livestock could also be an important way of controlling methane gas emissions,” added Dr Bull.