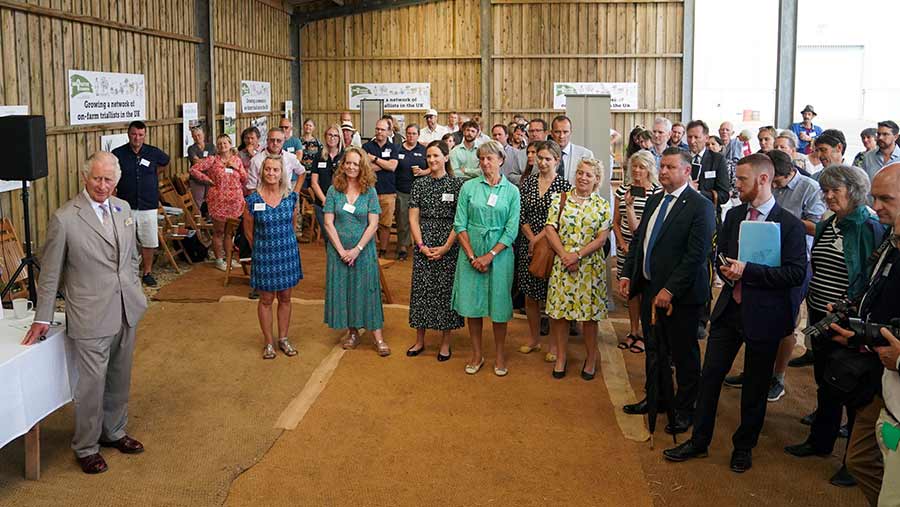 The Prince of Wales has praised the “remarkable” achievements of research network Innovative Farmers, as the group marks 10 years of collaboration with scientists to pioneer sustainable and nature-friendly practices in agriculture.

The Soil Association initiative is celebrating the success of more than 120 field labs that have placed farmers in the driving seat of agricultural research.

The network connects with about 12,000 UK farmers. Groups of farmers work directly with a researcher to design practical on-farm trials, called field labs.

Recent research areas include agroforestry, using satellites to manage grasslands, and “living mulch” – growing a permanent understorey of clover that crops can be sown straight into, reducing the need for ploughing, weedkillers and artificial fertilisers.

Innovative Farmers is funded by the Prince of Wales’ charitable fund, and HRH marked the 10th anniversary by cutting a cake at the event on Trefranck Farm, Cornwall, on Tuesday (19 July).

Addressing the event, Prince Charles said: “It’s been fascinating to see the results of these field labs and I’ve learned quite a lot. And I’m particularly interested, I must say, in living mulches, which is the next interesting and very critical area I think which I shall be particularly fascinated to see, and in agroforestry and silvopastoral possibilities.”

The Duke of Cornwall spoke to triallists from several field labs, including James Alexander, who is working on the living mulch.

“His Royal Highness was really interested in the living mulch trial, and he said he likes how if we do something, then he can look at the results and learn from where we’ve gone wrong,” said Mr Alexander.

“And that’s what Innovative Farmers is all about – learning from each other.

“We all do trials year after year, whether it’s by accident or intentional, but never with quite the support that Innovative Farmers gives you.”

The Soil Association said results from the past decade have shown that farmer-led research can help improve the health of livestock, reduce chemical use, and help the industry save money.

Triallists and co-ordinators shared insights on nature-based farming solutions – such as using woodchip to tackle weeds, predatory insects to fight pests, and using on-farm lab kits to cut antibiotics use in dairy cows.

As Britain sweltered in record-breaking temperatures, Prince Charles also used the start of his annual visit to the South West to sound another warning about climate change.

Speaking at a garden party on Monday (18 July) to mark his 70th anniversary as head of the Duchy of Cornwall, the royal said it was vital the UK met its net-zero targets, the Telegraph reported.

“If I may so say, those commitments around net zero have never been more vitally important as we all swelter under today’s alarming, record temperatures across Britain and Europe,” Prince Charles said.

“As I have tried to indicate for quite some time, the climate crisis really is a genuine emergency and tackling it is utterly essential – for Cornwall, the country and the rest of the world.”