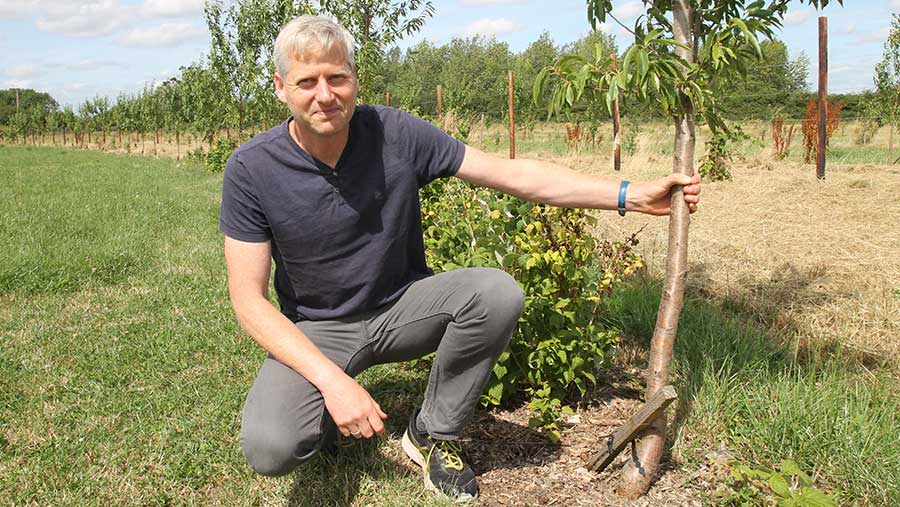 Agroforestry is something of the ‘poor relation’ when it comes to increasing the country’s tree cover, but its potential contribution to offsetting climate change should not be underestimated.

So, what is agroforestry and what should farmers consider if they are interested in taking it further?

We put the questions to Soil Association head of horticulture and agroforestry Ben Raskin.

Why has it failed to take off in the UK?

Apart from the lack of financial incentives, many farmers are simply opposed to trees, seeing them as detrimental to productivity and efficiency.

Perversely, they can actually help, improving soil structure, reducing run-off and extending grazing seasons, quite apart from their own value from fruit or timber.

What is needed is a change of mindset.

Don’t trees act as a draw on soil nutrients, meaning there is less available for the other crops?

There is some competition where the two meet, but this is more than compensated for by the increased productivity in the middle ground, where growing crops may benefit from reduced windspeed, partial shade, better soil structure and more pollinators.

Tree roots also go deeper, so are drawing up nutrients from further down.

What about the economics?

The biggest costs are the trees themselves, fencing and labour.

It therefore needs government support, or funding from other sources, to be totally viable.

But there are plenty of other rewards and, once established, the trees and shrubs generate their own revenue, so diversifying the farm income stream.

Agroforestry enables farmers to carry on with their roles as food producers.

Should farmers try it now, or wait until new policies, such as the Environmental Land Management system, are in place?

That depends on whether the agroforestry they are interested in has a short or a long payback.

If it is fruit bushes that produce a crop in a year or two, then get on with it.

If it is slow-growing trees for timber, then it may be better to wait a bit.

What about tenanted land?

It is very hard to plant trees on tenanted land as many landlords still see it as devaluing their asset.

They are therefore reluctant to allow tenants to adopt agroforestry.

We definitely need new arrangements, whereby landlords and tenants can have a stake in the trees and their products.

As the trees age, so their value appreciates, so landowners may benefit in the longer term.

Grazed orchards – the most established agroforestry system in the UK, with an estimated 14,200ha used this way, for example cider apples grazed with sheep in Herefordshire.

Examples include the planting of cereals between rows of hazel coppice at Wakelyns Agroforestry in Suffolk, while Duchy Home Farm in Gloucestershire rotates vegetables and grass between rows of apple trees.

Hedgerows, shelterbelts and riparian buffer strips:
This is where trees are grown between parcels of productive land.

See the Soil Association website for more information including case studies and the free Agroforestry Handbook produced for farmers.