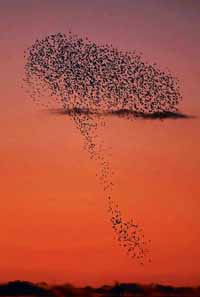 Lancashire dairy farmers are losing up to a tonne of feed a day to flocks of scavenging starlings.

The farmers have called for a rethink on the protected status of the birds after huge flocks began invading cubicle sheds.

It is the size of this winter’s flocks – and their resistance to bird-scaring tactics – that have driven farmers to ask for the shooting ban to be lifted.

“It’s like living with a swarm of locusts every day, and yet we’re the only EU country that won’t allow starlings to be controlled as a pest.

“We’ve never seen flocks as big as the ones we’ve had to cope with this winter,” said Leslie Hull of Gibstick Farm, Winmarleigh, near Garstang.

“They’re taking massive amounts of food and crawling all over the cows and covering the troughs and cubicles with bird lime.”

As soon as the troughs are filled for the Hull family’s 200-cow Holstein herd, the birds sweep into the cubicle buildings. Various bird scarers have been used, but the birds only disperse for a short time and then return.

“Farmers need to be able to use whatever deterrent is necessary to get rid of them. There’s a health risk as well as the cost of the food they’re eating,” said Mr Hull, who has applied to English Nature for a licence to shoot the birds.

Bird experts have suggested to farmers in the past that feeding caustic-treated wheat in the complete diet mix would make the feed unpalatable to the starlings, but experience has shown that the mixing process appears to destroy any adverse taste that might act as a deterrent.

Jim Thornley, Derby Lodge Farm, Roseacre, near Preston, has also been plagued with starlings this winter.

“The long spell of cold weather seemed to bring the biggest flocks. They fill the feed troughs for hours and as well as fouling the feed they make a lot of mess in the cubicles because there are so many of them,” said Mr Thornley.