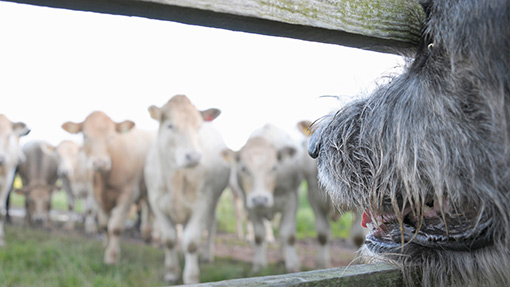 A dairy farmer who lost an estimated £250,000 in cattle due to the dog parasite neospora is calling on dog owners to stop treating the countryside like a “dog toilet”.

Yorkshire farmer Jonathan Sharp spoke out after he saw the story in Farmers Weekly of farmer Alan Brunt, who built a 300ft-long industrial fence around a public footpath to keep dog walkers off his land .

“Personally, I’m not really in favour of Mr Brunt’s fence, but what people need to realise is that they cannot keep using the countryside as a dog toilet, which a minority still do,” said Mr Sharp.

He said the neospora parasite affected his farm business for 12 years, costing his business an estimated £250,000 in lost revenue due to infected cows’ aborted pregnancies.

“Neospora started infecting cattle on my farm in 1995. Back then it was not widely known, but a young vet spotted the disease on my farm,” said Mr Sharp.

Read also: Avoid the risk of dogs spreading neospora in your herd

“We fenced the two major footpaths that we had an issue with and overnight we went from 12% abortions to zero.”

Mr Sharp, who farms 128 pedigree Holsteins at Tewitt Hall Farm, Oakworth, paid roughly £2,000 to fence off two fields at the farm, using a standard fence with barbed wire and netting.

But he said he understood why Mr Brunt went to the extremes of putting up an industrial fence in his field.

“If he had put up a barbed wire fence then someone could have cut it,” he explained.

“It’s clear to me that local dog owners treat that field as common land, when clearly it isn’t. People forget the countryside is a workplace for food production.

“When there is 20, 30, or 40 people walking dogs and they don’t clean up after their dogs it can become a big problem.”

Mr Sharp said neospora was not just a problem confined to aborted pregnancies in cows.

“Neospora can occur in successive pregnancies and pass down through the generations. Once you have a cow that gets infected, it is pretty much written off,” he added.

“If it’s a pedigree cow, it can get very expensive.”

So if industrial fencing of farmers’ fields is not the solution, what does Mr Sharp suggest?

“When someone takes a dog for a walk, they have to pick up the mess and get rid of it responsibly,” he said.

Recent studies carried out by Moredun and the former Scottish Agricultural College detected neospora in 22.9% of abortion cases. And within these positive samples, 35.2% of the pathogens present were neospora.