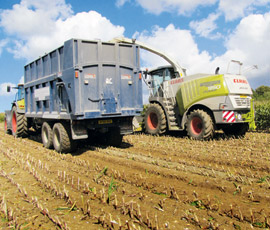 Green electricity generation from anaerobic digestion is widely regarded as the ‘next big thing’. Peter Hill looks at the opportunities it represents for contractors

What goes in must come out: and with the process of anaerobic digestion having little impact on the volume of feedstock going in, there is almost as much material to deal with coming out.

That presents opportunities for contractors at both stages of biogas production. So as forage contracting specialists gear up to harvest big tonnages of energy maize, other operators are getting to grips with the potentially more complex issue of applying large quantities of digestate to the land.

Nationally, the scale of this fledging green energy generating industry is small. But it is growing, with an accelerating number of plants being commissioned over the next few years.

For contractors, it represents a significant workload opportunity over and above the regular services required by livestock and arable farms. 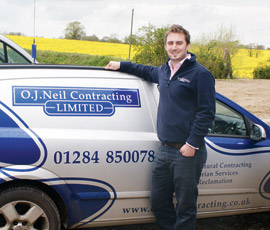 For Suffolk contractor Olly Neil, a new biogas plant virtually on his doorstep near Bury St Edmunds has provided an unequalled opportunity to expand his agricultural services.

Lime and muck spreading, plus manure spreader hire, were among his main activities up to three years ago, alongside ground works for the horse racing fraternity at nearby Newmarket.

Then he was invited to tender for the energy maize harvesting contract on a local farm: “It called for a major commitment to machinery, long before the plant was finished, but I decided it was too good an opportunity to miss,” he says.

O J Neil Contracting now has a long-term contract to harvest energy maize for the 1.4mW plant, which was commissioned in January this year. Two crops have been harvested to fill the large storage bunkers that will now be replenished annually from the 485ha (1,200 acres) of maize added to the farm’s arable rotation.

“The biggest difference in harvesting energy crops is the very short chop length required,” points out Olly Neil. “We’ll chop to between 17mm and 20mm for silage but go down to just 6mm for the digester to create maximum surface area for efficient break-down and gas production.”

That has a significant impact on the forage harvester’s work rate and fuel consumption: “You have to go slower to get that chop length with a standard drum; and you need to sharpen the knives more frequently to keep chopping efficiently,” Mr Neil points out. “Because the machine’s working harder it uses more fuel for a given tonnage.”

Although that implies a higher contract rate should be charged than for forage maize, the sheer volume involved is a counter balancing factor.

“We’d have to work across 15 dairy farms to chop the same amount of maize, with all the downtime and travelling costs that involves,” Olly Neil points out. “With the AD contract, it’s one big job in one location that we can work through with maximum efficiency.”

Because energy maize is harvested earlier at lower dry matter it dovetails neatly with forage crops. So far, the AD commitment has been completed before dairy customers started calling, so adding energy maize to an established forage maize chopping operation will extend the seasonal workload of a costly machine.

On the haulage front the contractor’s three 18t trailers are the same high-specification Larrington units that the farm runs. Up to seven trailers are deployed depending on the distance, hauling maize to large bunkers where further investment in the contract is evident in the shape of a 230hp JCB 434S Farm Master loader and 4.2m (14ft) industrial-scale buckrake. That can sweep away trailer loads in two passes and leave time for rolling to get rid of any air pockets. A tractor is also on permanent rolling duty.

Olly Neil’s involvement in post-digestion operations is limited to hiring out 15t Bunning spreaders through sister company Eastern Counties Spreader Hire to deal with the solids digestate. The farm is already equipped to irrigate the liquid fraction.

But for Shropshire-based father and son contractors Rupert and Wayne Middleton, liquid digestate application is set to become a significant part of their business.

“We already have a couple of AD plants operating in the area but I know of several more likely to be operational in the next year or two,” says Rupert Middleton. “There’s huge potential but it’s also a minefield because of the regulations that require Environment Agency permits in some circumstances.”

The Middletons already have a successful farm slurry application business pumping to a trailing shoe applicator through an umbilical supply system (Farmers Weekly, 8 April 2011). The liquid fraction of separated AD plant digestate can be put on to grass or arable land just as effectively using the same equipment.

It is a good source of crop nutrition but needs to be applied with even greater care and accuracy to prevent this material getting a bad name, Rupert Middleton maintains.

“I think there’s potential for things to go wrong, for public opinion to go against digestion plants and for the Environment Agency to take a tough stance,” he says. “There’s a tremendous opportunity for contractors to increase their workload but the job has to be handled with great care.”

Having originally assumed applying digestate would be much the same as putting on cow slurry, Rupert and Wayne Middleton have experienced a steep and sometimes baffling learning curve with regard to what constitutes “waste” and what can be applied to the land with little or no paperwork.

“If a farm grows its own feedstock for the AD plant and applies the digestate to its own land, then everything is straight forward,” says Mr Middleton. “But as soon as you start using feedstock grown on someone else’s land, use materials not grown specifically for the AD plant or apply digestate to someone else’s land, then things get more complicated.”

In particular, AD plants using food waste must produce digestate that meets the PAS 110 specification in order for it to be used on the land: “If it doesn’t, it’s classed as waste and then you’re involved in one of the most heavily regulated industries,” points out Wayne Middleton.

When defined as “waste” – which mainly concerns non-farm based AD plants – the digestate is pasteurised and stored in covered tanks before being hauled by road tanker and applied when crops can benefit from the nutrients it contains.

Nutrient and soil analyses determine the appropriate application rate and the new control system ensures it is both achieved and recorded.

Specially-written software for a Topcon X30 touchscreen terminal uses data from a flow meter on the trailing shoe applicator to enable the driver to set the CVT tractor’s forward speed, points out Wayne Middleton. It can then be adjusted accurately to compensate for any fluctuation in flow rate to consistently achieve the target application rate.

“Using the field mapping function I can make a risk assessment and flag up exclusion zones like watercourses,” he adds. “The downloaded reports shows exactly where the digestate has been applied, which is essential for farm records and for the Environment Agency.”

While relishing the potential workload that growth in biogas production promises, he urges farmers and others investing in the technology to pay as much attention to how the digestate will be dealt with as securing and storing feedstock supplies.

“Around 93% of what goes into an AD plant comes out of it, so storage is a significant issue, especially in NVZs because of the close season between October and January,” he points out. “Then there are only short windows for applying digestate to growing crops in spring and in autumn after harvest – and bear in mind that application permits can take six weeks to six months to obtain.”