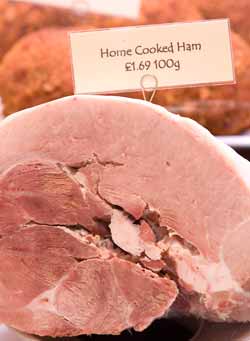 “Meat is a wasteful use of water and creates a lot of greenhouse gases,” said Lord Stern of Brentford.

“It puts enormous pressure on the world’s resources. A vegetarian diet is better.”

Lord Stern’s comments are significant because he is the author of the influential 2006 Stern Review on the cost of tackling global warming.

A global agreement to tackle climate change would result in soaring costs for meat and other foods that generate large quantities of greenhouse gases, he said.

Lord Stern made the comments in a front-page interview with The Times.

The article has attracted more than 283 comments from internet readers.

“Eating a vegetarian diet is a lot cheaper than a meat one,” wrote Jonte Jay.

“Let’s face it – the most expensive foods on the average families shopping lists are meat and dairy.”

Peter Radcliffe wrote: “Those who refuse to give up eating meat are contributing significantly to the destruction of the planet.”

But most comments were far less sympathetic.

Nicholas Fox wrote: “Tell me I’m having a bad dream and not really living in such a ridiculous country.”

Reuben Camara wrote: “Forget methane. There is far more hot air emitting from parasite Lord Stern’s mouth than can possibly be good for the planet.”