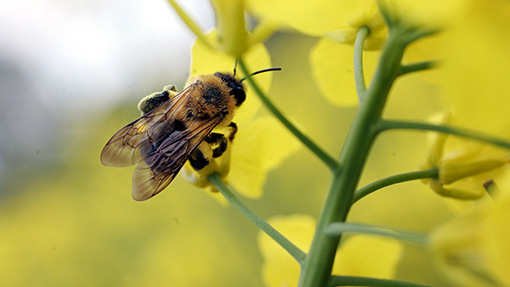 A pan-European report on bee health has found that death rates in the UK are among the worst in Europe.

Winter mortality rates ranged from 3.5% to 33.6% with a north/south geographical pattern, with countries in northern Europe recording the highest bee mortality rates.

The UK was among member states with the worst bee death rates.

Countries with a mortality rate between 10-15% included Germany, France, Latvia, Poland and Portugal.

Overall rates of seasonal colony mortality – during the beekeeping season – were lower than winter death rates, ranging from 0.3%-13.6%.

Summer losses in the UK were higher than the majority of other EU countries at 9.7%.

However, the European Commission, which contributed €3.3m to the report (70% of the eligible costs), said the overall bee mortality rates in Europe were “better than previously expected”.

In the US, last year beekeepers lost more than a third of their bees on average.

Last year, Brussels banned the use of neonicotinoid pesticides, produced mainly by Bayer CropScience and Syngenta, suspected of harming bees .

The EU Commission is attempting to address the decline in bee health by introducing new agri-environment measures in the reform of the Common Agricultural Policy (CAP), such as crop diversification and ecological focus areas.