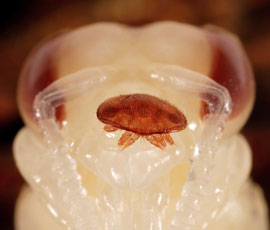 British scientists have identified the virus from a parasitic mite that has helped wipe out billions of honey bee colonies globally.

Researchers at the University of Sheffield have discovered that the Varroa mite causes the Deformed Wing Virus (DWV), which proliferates in honey bee colonies.

The blood-sucking mites act as incubators of a deadly form of the disease, which they inject directly into bees’ blood.

The team, led by Stephen Martin from the University of Sheffield, studied the honey bees in Hawaii, where a new virulent form of the virus has become established since 2007.

Dr Martin, of Sheffield University’s Department of Animal and Plant Sciences, said: “Just 2,000 mites can cause a colony containing 30,000 bees to die.

“The mite is the biggest problem worldwide for beekeepers; it’s responsible for millions of colonies being killed.”

Understanding the changing viral landscape that honey bees and other pollinators face will help beekeepers and conservationists worldwide protect these important insects, he added.

“We have discovered what happens at the start of an infection. The goal is to understand how the infection comes about so that we can control it,” said Dr Martin.

“Deformed Wing Virus is naturally transmitted in bees through feeding or sex but the mites change the disease so it becomes more deadly, shortening the bees’ lives.”

Dr Martin said the ability of a mite to permanently alter the honey bee viral landscape may be a key factor in the recent colony collapse disorder (CCD) and over-wintering colony losses (OCL) as the virulent pathogen strain remains even after the mites are removed.

Bees are important to agriculture for pollinating our food crops and maintaining biodiversity in the rural environment.

Conservationists have blamed other factors for the global decline in bees, including fungi, pesticides and decreased plant diversity. This week, the French government banned Cruiser OSR, a Syngenta neonicotinoid pesticide which has been linked to bee decline.

But Ian Jones, of the University of Reading, said the Sheffield University study suggested that the Varroa mite and the virus were the “main culprit”.

“This data provides clear evidence that, of all the suggested mechanisms of honey bee loss, virus infection brought in by mite infestation is a major player in the decline,” said Dr Jones.