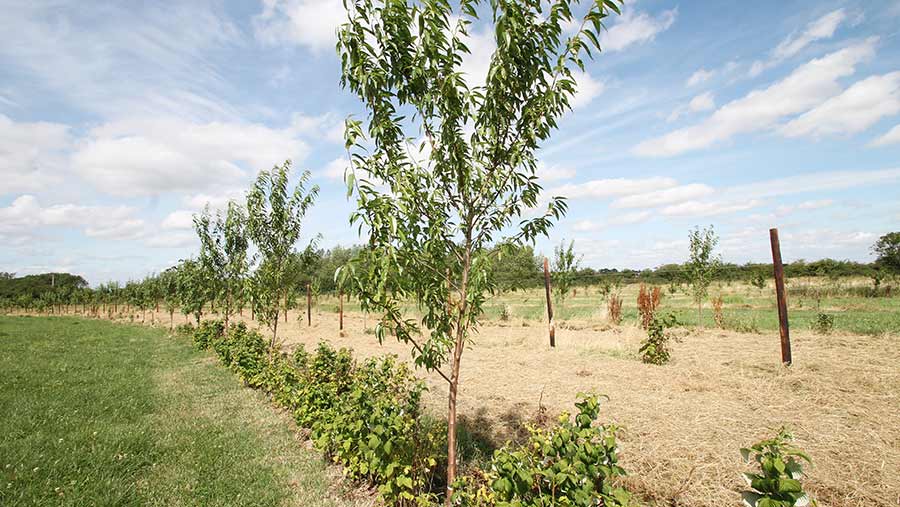 One of the recurring messages from the recent spate of reports and conferences about climate change is that farmers and landowners need to be planting more trees.

That was spelled out particularly stridently by Labour shadow minister for energy and climate change Barry Gardiner, at a recent Country Land and Business Association summit.

See also: How farmers are saving money by planting trees

He pointed out that while other sectors, such as transport and energy, had worked hard to contain their greenhouse gas emissions, agriculture had effectively “flatlined” since 2008.

That was disappointing as decarbonising agriculture did not require a “leap into the unknown”. “Trees have been doing it for years,” said Mr Gardiner.

Yet government targets have repeatedly been missed. The official government ambition was for the UK to be planting 20,000ha of new woodland annually by 2020.

But last year, across the UK, less than half that target was delivered.

Currently the UK has only 13% woodland cover, compared with an EU average of 37%.

In order to reach the government’s target of “net zero” carbon emissions by 2050, the Committee on Climate Change is recommending tree planting at the rate of 30,000ha a year. But how might that be achieved?

The Woodland Trust charity is extremely active in encouraging and helping to fund projects, accounting for roughly half the new tree planting last year.

The government has also put up £6m to kickstart the new Northern Forest, which will span 120 miles from Bradford to Liverpool over the next 25 years.

And there are agri-environment schemes, such as Countryside Stewardship in England, the Forestry Grant Scheme in Scotland and the Glastir Woodland scheme in Wales, which all offer farmers some financial assistance for establishing or improving blocks of woodland.

But agroforestry could play a significant role too, if the right advice and encouragement is given to farmers, and if future agricultural policy provides appropriate financial incentives.

Unlike in Spain and France, there is currently little funding for agroforestry in the UK.

In the words of Mr Gardiner, “it is not ‘forest’ enough for woodland creation grants, but not ‘farming’ enough for CAP payments”.

In Scotland, for example, a minimum density of 200 trees per hectare is required, meaning that farms cannot receive both agroforestry support and CAP income support on the same area.

In Wales, support for agroforestry is only available on municipal or private land, but not on agrarian land, while England provides no support at all.

But, according to a new agroforestry handbook produced by the Soil Association and the Farm Woodland Forum, the manifold benefits of agroforestry justify its full inclusion in any future, post-Brexit farm policy.

Ben Raskin, one of the handbook editors, and head of horticulture and agroforestry at the Soil Association says trees can bring a whole range of benefits both to the farm and wider environment.

Mr Raskin says benefits include “improved soil health, carbon capture, biodiversity and animal welfare, as well as protecting soil from wind and water erosion, given the increasingly volatile weather we are getting.”

At the very least, any new farm policy should not disincentivise farmers pursuing agroforestry.

Ideally it should support pilot schemes and encourage wider adoption as part of the “public money for public goods” agenda, he suggests.

The Agroforestry Handbook runs to 150 pages and includes full explanations about different types of agroforestry and system design.

It includes numerous case studies from around the world as well as presenting the economic case for farmers to branch out into it.

In particular, it points to the potential for increased yields of both livestock and arable crops, reduced mortality and better welfare.

This can come about through: