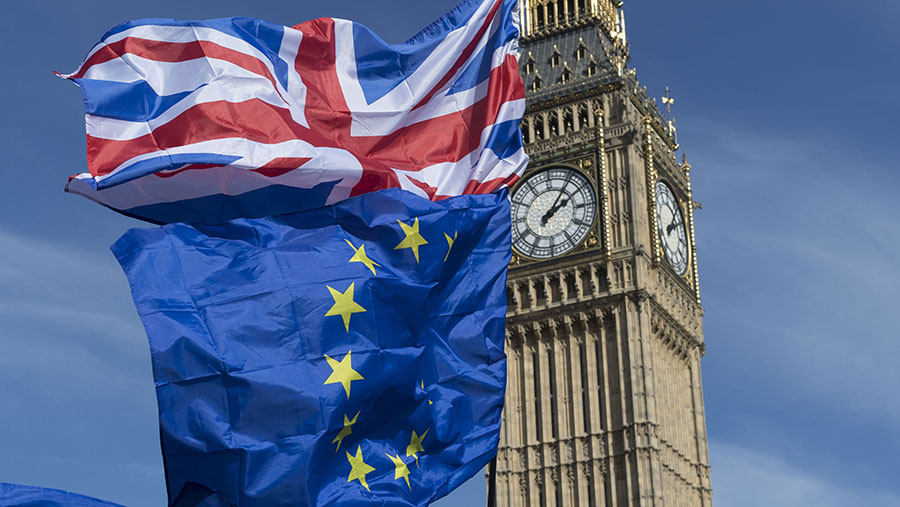 The UK’s farming unions want to see a raft of measures to counter market volatility, which they believe will be vital for farmers, unless the government secures a post-Brexit trade that is good for agriculture.

As the government finally triggered the Article 50 process for the UK to leave the EU this week, we examine the farming unions’ visions for how agricultural policy should be shaped.

The NFU underlined its belief that agricultural policy should be based on three cornerstones:

NFU president Meurig Raymond says Brexit is an opportunity to shape a new deal for both the farming sector and society.

“We’ve established an objective for this policy: to enable farm businesses to be competitive, profitable and progressive,” he says.

Future policy should comprise a package of incentives and support for British farming and continuing current support levels is essential if the government is serious about maintaining farming’s already substantial economic contribution.

The NFU’s proposals will be submitted to government ministers later this year – possibly as early as the summer.

But how support is split between each of the three elements of the new policy will depend on the eventual Brexit deal between the UK and the EU.

The NFU is working on a detailed vision of what these measures might include.

It is early days, but they are likely to entail a mix of crop insurance schemes, financial instruments, as well as fiscal measures, such as tax breaks.

Under this scenario, farmers would also require continued direct payments, explains Mr von Westenholz. “British farmers would need direct support to remain viable. But in a more favourable scenario, you could focus on productivity and the environment.”

A better scenario would see the UK secure a free trade agreement with the EU – giving market access on the same or very similar terms to the situation now.

With less of a need for market volatility measures, more money could be directed at measures that boost farm productivity.

This could include funding for research and development, skills and training and business development.

A smooth Brexit – with a satisfactory outcome on regulation and a guarantee that UK farmers have access to adequate labour from overseas – would also free up funding to support environmental measures, including schemes that reward farmers for the provision of public goods.

Focus must be on farm profit and free trade

Profitability for Scottish farmers and crofters must be the focus of forthcoming Brexit negotiations on agriculture, says NFU Scotland policy director Jonnie Hall.

The union believes producers should be supported post-Brexit by continued free trade with the EU, international trade deals, access to a non-UK labour pool and a well-funded, refreshed agricultural policy that meets the needs of Scotland’s landscape and farming practices.

But Mr Hall warns: “Substance and detail on what measures will be prioritised for the agricultural industry have been frustratingly sparse.”

NFU Scotland would continue to press the importance of ensuring any Brexit deal worked for Scottish farmers, he adds.

Farmers north of the border must not be penalised by the escalating disagreement between the UK and Scottish governments on how future agricultural policy is developed, says Mr Hall.

“The needs of Scottish farmers and crofters must be put ahead of political posturing.”

NFU Scotland also wants a mechanism that guarantees to return at least the same amount of funding to Scottish agriculture as the industry received within the EU.

Devolution must allow an appropriate agricultural policy to be developed in Scotland, says the union.

“NFU Scotland is crystal clear that any approach that drops a ‘Defra-centric’, one-size-fits-all policy on to the devolved nations would be unacceptable,” says Mr Hall.

“Scotland should continue to determine its own agricultural policy.”

Put family farms to the fore

Post-Brexit policies for agriculture must recognise the particular importance of family farms to the Welsh economy, says the Farmers Union of Wales.

“The family farm is the cornerstone of much of our agriculture and our way of life – far more so than in England,” says FUW president Glyn Roberts.

“Therefore we must ensure that the role of such farms in rural Wales is recognised.”

“If we value our communities, our public services, our countryside, our heritage, our schools and our jobs, then we must protect them.”

Gross output from agriculture is worth almost £1.5bn to Wales, with food and drinks export worth £302m to the Welsh economy.

The industry is particularly important in mid and north Wales, where it accounts for one in 25 jobs.

“Hence, we can’t have an ‘England-centric’ policy once we leave the EU,” says Mr Roberts.

“We need the UK government to appreciate the difference and repatriate powers from Brussels to the Welsh government – ideally within a new UK framework.

“We can have a prosperous future for the sector after we leave the EU and there are plenty of opportunities to be explored but a lot of it depends on the willingness of our politicians to recognise how different farming across the devolved nations is.”

Cross-border trade is ‘vital for farmers’

A Brexit deal that threatens cross-border trade between Northern Ireland and the Republic of Ireland will be a major threat to agriculture in both countries, says the Ulster Farmers’ Union.

Northern Ireland is the only UK nation that shares a land border with the EU.

“It is important politicians fully understand the detail of cross-border trading and the need for this to be factored into whatever decisions are ultimately taken on how the border will operate after Brexit,” says UFU president Barclay Bell.

“This has major economic implications for the entire agricultural industry.

“Trade has traditionally been on an all-island basis, and if this cannot continue it will disrupt trade relationships that have been the norm since long before the UK and Ireland became EU members.”

A hard Brexit, which fails to take into account the practical realities of the Irish border, would be a major problem for the farming and food industries – especially the dairy, sheep and horticulture sectors, says Mr Bell.

“Access to cross-border labour is also a significant issue for many of our horticulture farmers.

“In addition, there are farm businesses that have land straddling the border and there is cross-border ownership of processing capacity in both the dairy and red meat industry.”