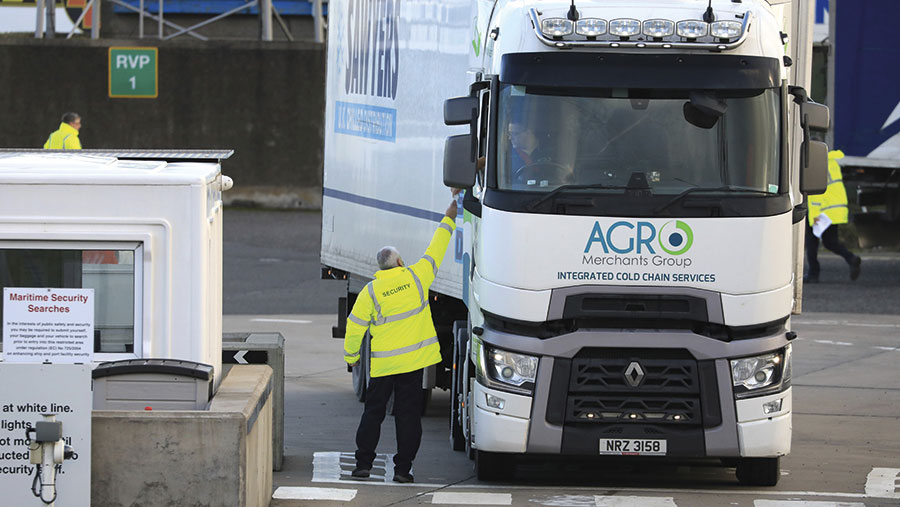 Red tape and other hurdles are hampering trade in agri-food products between the UK and EU – despite last month’s Brexit deal.

Industry leaders have urged farmers to focus on the positive aspects of the free trade agreement (FTA) between Brussels and London. But they accept that the deal falls short of the frictionless trade many producers were hoping for.

Announced on 24 December, the FTA means tariff-free trade can continue in both directions. But non-tariff barriers – including increased paperwork and certification – are slowing trade, including within the UK itself.

NFU president Minette Batters said the conclusion of a Brexit deal was a “very positive step forward”. But she warned that there would be challenges to overcome, with some traders facing additional costs of 5-8%.

The government must do everything possible to ensure food exports were “not left languishing in queues at the border”, Mrs Batters stressed. And it was vital that any extra costs were not passed back to farmers already operating on thin margins.

National Sheep Association chief executive Phil Stocker said the deal was an immense relief. It had averted the threat of a 48% tariff on lamb exports – but signing off export health certificates would involve an increased workload.

Mr Stocker said: “We should still expect some disruption to trade and the movement of goods over the first month or so until things settle down and exporters and importers become au fait with new systems.”

Within the UK, farmers moving livestock, animal products, food and feed of non-animal origin, and plants and plant products from Great Britain to Northern Ireland must pre-notify shipment of a consignment at least 24 hours in advance.

Consignments must be pre-notified because the Brexit deal requires the UK to ensure that Northern Ireland continues to maintain an open border with the Republic of Ireland, which is an EU member.

The British Meat Processors Association said UK firms faced being put at a severe competitive disadvantage because of the new requirement to complete an export health certificate for every single delivery of animal-origin products to the EU.

Farmers and growers who export or import produce must also check that any wooden pallets and crates used meet post-Brexit standards. Any business that does not comply could face fines or rejected shipments.

Some trade could be stopped altogether. Growers export about 30,000t of British seed potatoes worth some £13.5m to the EU annually – but ongoing sales are unlikely unless Brussels grants the UK “third country” status for shipments to continue.

Former Defra secretary Michael Gove acknowledged there would be “bumpy moments” as business got to grips with the new rules. But he said the government would to “try to do everything we can to smooth the path”.