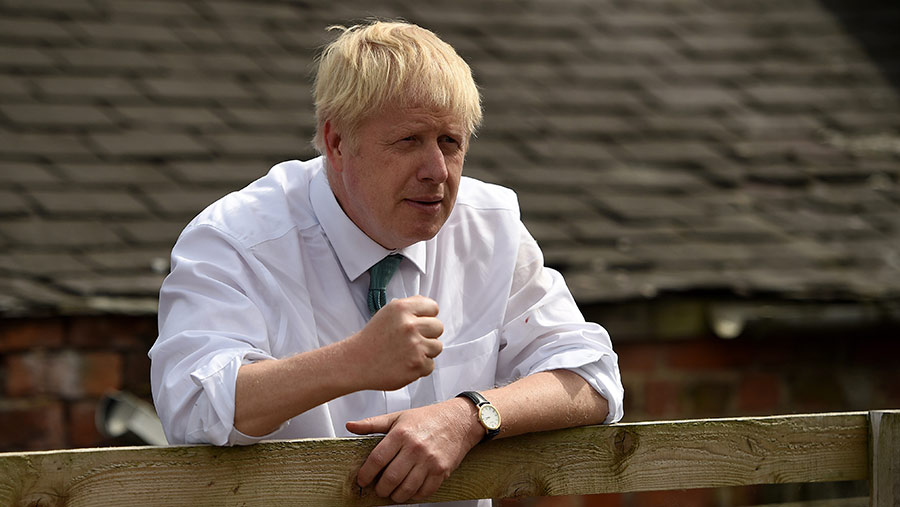 Boris Johnson is set to outline his post-Brexit plans for farming as he makes his first visit to Wales as prime minister on Tuesday (30 July).

Mr Johnson visited poultry farmers at Shevington Farm, at St Brides Wentlooge, near Newport to discuss their concerns face to face amid the increasing likelihood that the UK will be leaving the European Union without a deal.

Speaking ahead of the visit, Mr Johnson heaped praise on Britain’s “great farmers” and he maintained that trade deals and leaving the EU’s Common Agricultural Policy (CAP) would offer new opportunities.

“I will always back Britain’s great farmers and as we leave the EU we need to make sure that Brexit works for them,” he said.

“That means scrapping the Common Agricultural Policy and signing new trade deals – our amazing food and farming sector will be ready and waiting to continue selling ever more, not just here but around the world.

“Once we leave the EU on 31 October, we will have a historic opportunity to introduce new schemes to support farming – and we will make sure that farmers get a better deal.”

Mr Drakeford said the prime minister has “no public mandate for a no-deal Brexit”, which he said would be “catastrophic for Wales”.

He told the BBC: “If the UK does leave the EU, the UK government must work in close partnership with the Welsh government to mitigate negative effects on Wales and its economy.”

His comments come after former Defra secretary Michael Gove, who has been put in charge of planning for a no-deal Brexit, said the government “is now working on the assumption” of a no deal.

Mr Johnson’s visit is also timed to coincide with a by-election on Thursday (1 August) as the Conservatives battle to hold the Brecon and Radnorshire seat.

‘Our hands are tied’

She said: “We would like to know how he and his government are specifically going to back farmers financially. What is the Treasury prepared to do to support us? We need the meat on the bones.”

When asked about the prospects of a no-deal Brexit for farming, Ms Reader said: “If you are going to take the advice coming out of NFU, AHDB and a number of leading economists, it spells disaster because of the tariffs. We cannot be competitive abroad.

“The EU takes the majority of Welsh produce. It’s on our doorstep. I’m worried about cheap produce coming in and we will no longer be protected by the tariffs the EU currently has in place.

“I feel like we have got both hands tied behind our backs.”

Currently, the UK receives about £3bn from the EU under the CAP, through direct subsidies or agri-environment schemes.

Defra has announced plans to phase out direct payments over a seven-year period from 2021, giving farms time to adjust. In its place, it will introduce a new system of paying farmers “public money for public goods”.

Brexiteer ministers have consistently said that the Treasury will be able to fund the UK agriculture to at least the same level after Brexit. However, the UK government has made no firm commitment to funding level post-2022.