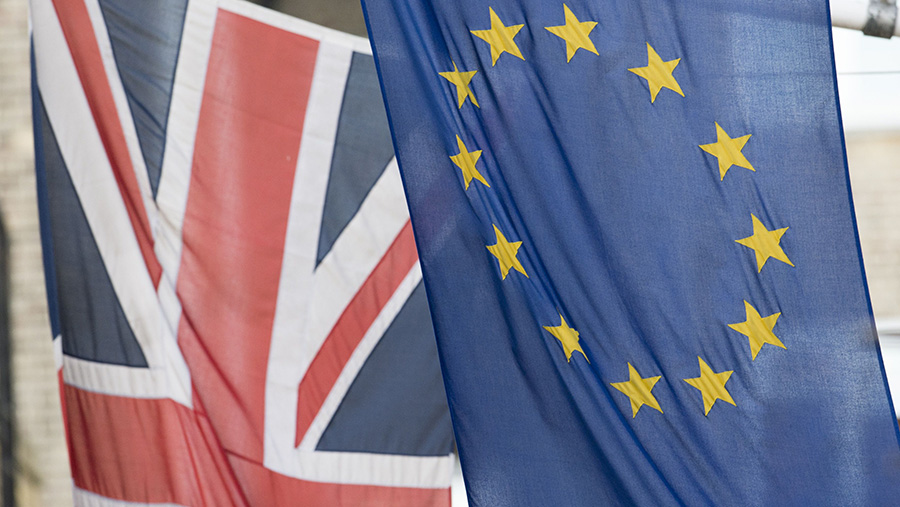 Farm incomes will plummet if the UK leaves the EU – unless there is a sea change in the government’s attitude to agriculture, suggests an NFU report.

Livestock and dairy farmers would bear the brunt of the post-Brexit scenario most in line with existing government policy, says the union.

Meat and milk production would fall, with consumers increasingly reliant on imports as UK self-sufficiency in food declines, it warns.

The study was conducted for the NFU by researchers at Wageningen University’s world-leading agricultural institute in the Netherlands.

Economists considered the likely impact of different approaches to UK trade in agricultural products, as well as different levels of farm support.

“Leaving the EU is likely to have significant implications for the agricultural sector in the UK,” says the 54-page document.

“International trade in agricultural products and public support payments for farmers are two critical elements in the EU referendum debate.”

Analysts considered three different approaches to trade in the event of the UK leaving the EU following this summer’s in-out referendum.

Researchers assumed there would be no change in the level of environmental payments to farmers.

Scenario one: Free trade with EU and direct payments

The first scenario examined the impact of a free trade agreement (FTA) between the UK and the EU. An FTA and the retention of existing direct payment levels is the option preferred by Defra minister George Eustice, who is campaigning for the UK to leave the EU.

Farm incomes across all sectors would rise under the FTA scenario – but only if 100% direct payments are maintained.

A more mixed picture emerges if direct payments are halved, with all sectors other than horticulture, pigs and poultry making a loss if payments were abolished.

This is the scenario facing farmers if the UK leaves the EU without having first negotiated free trade agreements with the EU and its international partners.

Farm incomes across all sectors would rise under the WTO scenario so long as 100% direct payments are maintained – and by a greater extent than under the FTA scenario.

At the same time, any losses if payments were abolished would be less than under the FTA scenario.

Under this scenario, the EU would apply an external tariff to UK exports. The UK would apply a 50% reduction in those same rates to EU and non-EU imports – an approach which would benefit consumers through lower food prices.

UK trade liberalisation would have a “significant negative impact on all sectors” except combinable crops even if 100% direct payments were maintained, says the report.

Farm incomes would fall by more than 25% for all sectors other than horticulture if payments were abolished, it adds.

In summary, the report is a stark reminder of how much UK agriculture relies on direct payments to maintain farm incomes.

The sectors least affected under each Brexit scenario are those least subsidised – although the study does leave some questions unanswered (see “Crucial questions are political, not economic”, below).

An NFU document accompanying the Wageningen report suggests the first two scenarios would require an about turn in the government’s attitude to agriculture.

“This would be a reverse of the policies that successive British governments have pursued for the past 40 years,” it says.

A protectionist stance would also “go against a worldwide trend to more open agricultural trade and would be in contradiction to the stated aims of many of those who advocate that the UK should leave the EU,” says the NFU.

Instead, the union suggests that the third scenario of UK trade liberalisation is more likely – and with it the prospect of lower prices for livestock and dairy farmers.

“This appears more in line with UK government policy,” it says.

The report’s findings are being discussed at a series of 28 NFU roadshows.

Members should contact their regional office for details. A union council meeting will then debate the issue on 18 April when the NFU will decide whether to publicly declare if it is for or against the UK leaving the EU.

‘Crucial questions are political, not economic’

The Wageningen report was commissioned after NFU members said they needed more information to consider more fully the implications for British agriculture if the UK left the EU.

But the findings are still only indication of what may happen based on a number of assumptions and scenarios.

That is because the eventual impact of Brexit on agriculture will largely depend on the policy position adopted by the UK government – and the level of farm payments.

“Ultimately, economic models make predictions based on what may happen under a range of assumptions,” says NFU director general Martin Haworth.

“The modelling work is limited to what can be quantified.”

The report fails to consider the potential benefits of a post-Brexit UK government slashing the level of regulation faced by farmers.

But neither does it consider any potential decline in demand for British food if some processors relocate outside the UK to remain in the single market.

Some scenarios appear to suggest serious risks to farm income from leaving the EU, while others suggest there could be a more favourable outcome.

“It comes down to a matter of judgement as to which of the scenarios appears the most likely,” says Mr Haworth.

As a country, the UK has been a strong advocate of freer trade in agricultural products. Both Labour and Conservative-led governments during the past 20 years have called for less tariff protection across all farm sectors and for the abolition of direct support through the CAP.

“The real questions to be asked and considered ahead of the referendum are political rather than economic,” says Mr Haworth.

“What would the UK government’s position be on international trade and its impact on the consumer price of food? How would it ensure British farmers are treated fairly?”