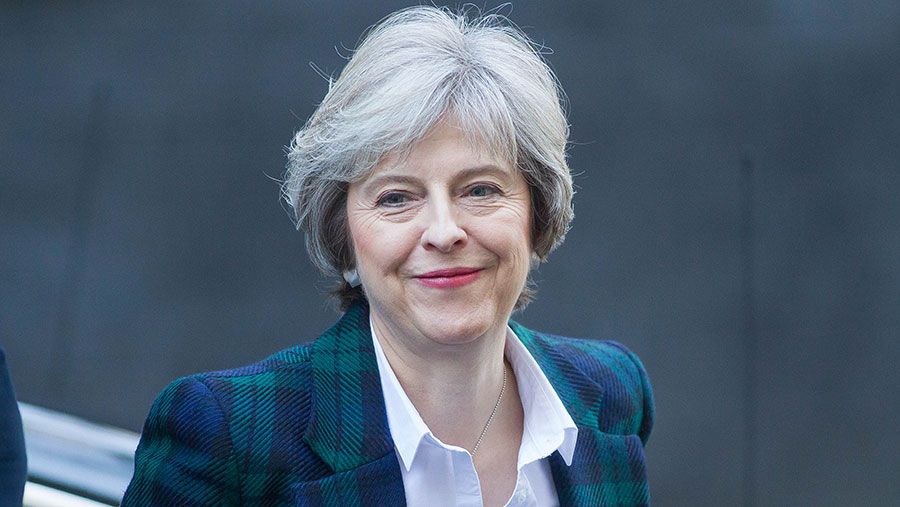 Farm leaders say agriculture must not be sacrificed as the UK seeks free-trade deal when it leaves the EU.

Industry leaders were speaking after prime minister Theresa May confirmed on Tuesday (17 January) that the UK would leave the EU single market.

In a speech setting out her Brexit plan, Mrs May also ruled out the UK’s membership of the EU customs union – instead stating her intention to pursue a free-trade agreement with the EU.

Doing so would enable the UK to control immigration, she said.

NFU president Meurig Raymond said: “The important thing for British farming is that we have access into that European market free of tariffs and free of any non-tariff barriers.”

British farming underpinned the country’s food and drink sector, said Mr Raymond. It was worth £110bn to the national economy.

“The prime minister has set out a very ambitious plan.

”I would hope that the negotiators on the other side of the water will recognise that a bad trade deal for the UK will not help either the UK or the European Union in the longer term.”

Farming was of vital strategic importance for the country for food production, driving the economy and also managing Britain’s landscapes, environment and natural resources.

It was vital that a post-Brexit Britain worked for everyone – which must include our the agricultural sector, said Mr Raymond.

In a statement, the NFU’s ruling council said it welcomed Mrs May’s acknowledgement that access to a reliable workforce from overseas was vital for many British industries.

This was especially so for agriculture and the NFU looked forward to that acknowledgement being turned into a commitment which was then acted on.

The NFU was now seeking urgent talks with the government as to how a post-Brexit Britain could work for UK food production, said Mr Raymond.

He said: “A divorce from the EU which does not encompass either single market access or customs union membership [is] potentially very damaging for UK agriculture and food production.”

Political infighting over migration figures had taken priority over the economic realities of income generation and industries such as agriculture and food, said Mr Caffall.

“Inside or outside of the EU, Europe remains the UK’s biggest market place.

“The increasing spectre of tariff levels under [World Trade Organization] rules pose ever greater threats to our ability to continue competing in traditional markets.

“This, in turn, threatens the sector’s ability to generate taxation income for the UK Exchequer.”

Ross Murray, president of the Country Land and Business Association, said he fully support the prime minister‘s plan to secure the best possible free-trade agreement with the EU.

“Our aim must be to retain tariff free access for all products and all parts of the agri-food supply chain.

“We will continue to provide whatever support we can to help in securing this vital outcome.”

But Mr Murray said the association was “more cautious” about the consequences of new trade deals with other countries and markets.

“We will urge the government to consider closely the balance of opportunity and risk for the agri-food sector that is specific to each and every potential deal available to the UK post-Brexit.”

The type of Brexit the prime minister has set out represented a dramatic change and would have a particularly major impact on UK farming, said Mr Murrary.

“We therefore welcome the prime minister’s reassurances about avoiding economic cliff edges and the importance of a phased implementation,” he said.

“Getting this implementation phase right will be critical to the livelihoods of farmers and the future of rural communities across Britain.”