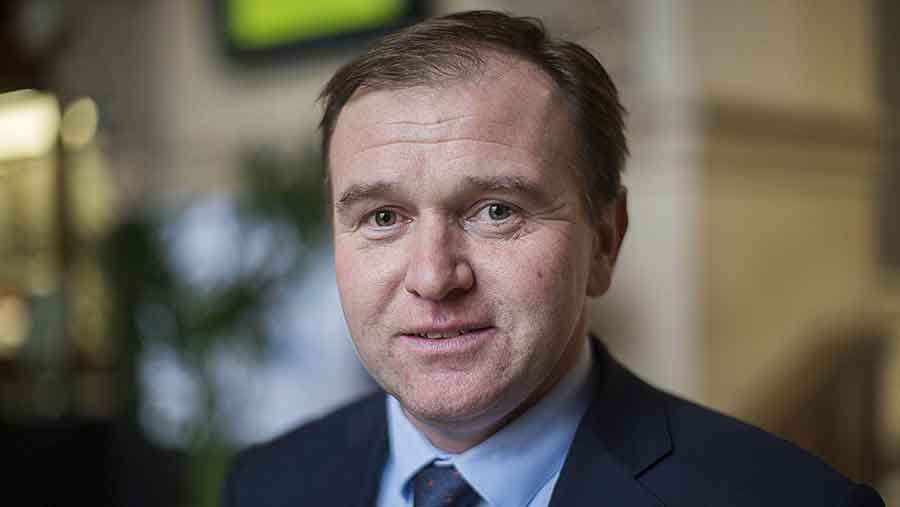 Farm minister George Eustice has spelled out his vision for UK agriculture outside the EU and insisted: “We won’t regret making a Brexit”.

Mr Eustice has faced criticism for a lack of detail on the effect that a possible exit from the EU would have on UK agriculture.

But in a speech made in London on Wednesday (23 March) at the launch of Farmers for Britain, a new campaign led by farmers who believe that the UK would be better off outside the EU, the minister set out his ideas.

He highlighted four key themes to a future UK agriculture policy outside the EU: science and technology; how to cope with weather and price volatility; replacing current “chaotic” schemes for farm payments; and environmental stewardship.

“We must invest more in science and technology if we want our farms to make the next step forward,” said Mr Eustice, outlining his views on agricultural science.

“New genetic breeding techniques such as gene editing could reduce our reliance on pesticides so we should support their development and put in place a new UK regulatory regime based on evidence and science, rather than the politics of the EU.”

Mr Eustice said farming had always been a “risky business” because of the weather and price volatility. “Farmers want to earn their profit from the market but they need a helping hand when things go wrong,” he added.

Mr Eustice argued that the CAP, which accounts for almost 40% of the EU budget, was a “centralised and bureaucratic policy”.

I believe that if this country votes to leave, then in five years’ time the only question people will ask themselves is why we didn’t do it sooner
George Eustice, farm minister

But an exit from the EU would allow the UK to replace the system of cross-compliance, which costs Defra about £100m each year in penalties, as well as the “chaos caused by an annual application process”.

But the scheme would be made simpler and with a broader remit of schemes to include measures that improve animal welfare.

Mr Eustice said he was interested in exploring a new farm area payment that rewards any farmer who signs up to privately operated, UKAS-accredited schemes that promote basic measures to deliver environmentally sensitive farming.

The minister also moved to allay fears that the UK government would scrap farm payments in the event of an EU exit.

Prime minister David Cameron had already given him assurances that the government “will continue to support farming and the environment financially”.

Mr Eustice said: “Let’s get one thing straight. The UK government will continue to support farming and the environment financially.

“The prime minister has made that clear and I agree with him. After all, non-EU countries such as Switzerland and Norway actually give more support to their farmers than we do.

“In the scheme of things, the amount of money spent on our countryside and wildlife is very modest when compared with spending on other departments. But we could spend our money more effectively if we had control.”

Mr Eustice also hit back at claims from Mr Cameron that UK livestock farmers outside the EU would face more than £300m in export tariffs.

“We will also maintain a free-trade agreement,” he insisted. “Last year, we exported £7.5bn worth of food to the EU but we imported food worth £18bn. We have an annual trade deficit with the EU in food alone of £10bn so they need a free-trade deal.”

Finally, Mr Eustice said a UK free from the shackles of the EU would pilot new ways of doing things to deliver the changes that British farming craves.

“I believe that if this country votes to leave, then in five years’ time the only question people will ask themselves is why we didn’t do it sooner,” he concluded.