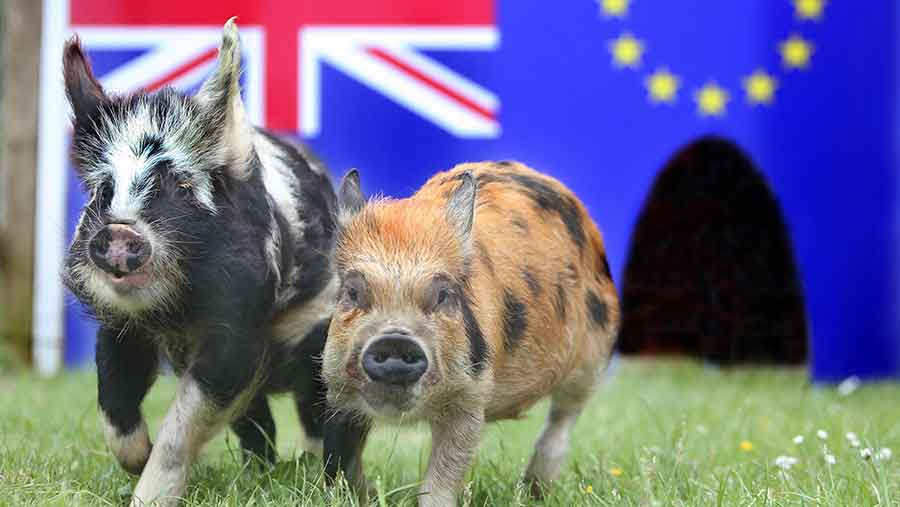 When prime minister Theresa May delivered her speech setting out her objectives for negotiating Brexit last month, agriculture barely got a mention.

That set alarm bells ringing for many in the sector, because it suggested that food and farming would rank low in the government’s priorities when it comes to agreeing the UK’s severance package from the European Union.

It has therefore come as some relief to find that, following publication of the government’s more detailed White Paper on Brexit last week (2 February), there are now quite a few references to agriculture – and most of them are encouraging.

For starters, the White Paper states that the government’s overriding priority is to secure the most open trade possible in goods and services between the UK and the EU.

“With respect to agriculture and food, the UK is a net importer of agri-food goods,” it says. “Whilst UK exports of agriculture, fisheries and food products to the EU were £11bn in 2015, imports were £28bn, and over 70% of our annual agri-food imports come from the EU.

“This underlines the UK and EU’s mutual interest in ensuring continued high levels of market access in future.”

But quite how that is to be achieved is the big unanswered question, which still poses potential dangers for agriculture.

In the one breath, the government says it wants trade with the EU to be as “free and frictionless as possible”.

In the next, it says it wants to “take advantage of the opportunity to negotiate our own preferential trade agreements around the world”.

Can it have it both ways? Under current arrangement, tariff-free trade with the EU is only possible by being a member of the EU customs union – and that means accepting a common tariff on imports from anywhere else in the world.

But the White Paper insists “we will not be bound by the EU’s common external tariff or participate in the common commercial policy”. Instead, it says the UK wants a new customs “arrangement” with the EU, rather than a customs “union”.

“There are a number of options, including a completely new agreement, or for the UK to remain a signatory to some of the elements of the existing arrangements. The precise form of this new agreement will be the subject of negotiation.”

That negotiation is going to be a tough one. The UK may want to secure tariff-free trade with the EU. But, at the same time it wants to strike other free-trade agreements with countries around the world, such as New Zealand, Australia and the US.

“OK, the UK is in a good starting position, since it is already in a free-trade situation with the EU, and there is a strong probability that agriculture would be part of any free-trade agreement.

“But it is not guaranteed – and that is because, when you look at other EU free-trade agreements, there always seem to be exceptions and limitations, especially when it comes to agri-food.

“There are potential snags. For example, with respect to lamb, the UK has significant exports to the EU. If, after Brexit, the UK and New Zealand sign a free-trade agreement, cheap New Zealand lamb would displace UK lamb, which would then seek an outlet in the higher-priced EU market.

“French farmers will not be happy with what could amount to British lamb being dumped on their shores.”

As such, there may be some reluctance in Brussels to agree to a “customs arrangement” for agricultural commodities that does not respect the same common tariffs as the rest of the EU.

Leaving the single market and customs union are also likely to impose additional costs on trade in agricultural goods between the UK and EU.

“These additional costs are of two kinds,” says Prof Matthews. “The first is, as a result of leaving the customs union, there will need to be additional documentation, essentially to prove country of origin.

“The second, and greater cost, comes from leaving the single market, and you’ll then need to certify that, whatever you are exporting, meets the standards of the other party.

“This may well involve EU inspections of UK facilities, and in food it could be expensive to get these certifications, especially if UK and EU production standards diverge over time.”

One of the aims of the UK government in pursuing a “customs agreement” with the EU will be to get some sort of regulatory co-operation going, which could avoid some of these additional costs.

The government has also hinted at a “phased” departure from the EU. “It is in no one’s interests for there to be a cliff-edge for business, or a threat to stability, as we change from our existing relationship to a new partnership with the EU,” says the White Paper.

What levels of tariffs might the UK set after leaving the EU customs union?

“The only limit on tariffs is what the UK puts into its schedule of commitments to the WTO,” explains Prof Matthews. “That schedule has to be agreed within the next two years, though we know that the UK is going to try to replicate the current EU schedule. That will set the maximum tariff that the UK can apply.

“But of course it can then set its applied tariff at any level, so long as it doesn’t exceed those bound (maximum) levels, and so long as it is non-discriminatory. It has to set the same tariff to all trading partners unless, of course, they are signed up to a free-trade agreement with the UK.”

The White Paper makes clear that free-trade discussions are already under way with New Zealand, Australia and India, and the government is also keen to pursue similar deals with the US, China and Brazil.