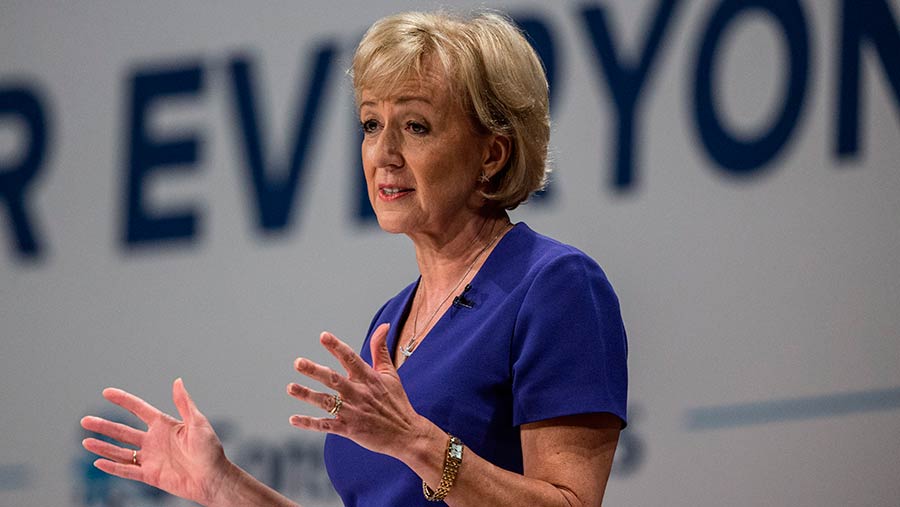 Defra secretary Andrea Leadsom has sought to allay fears that British farmers could lose out as the government secures Brexit trade deals for other UK industries.

Mrs Leadsom was speaking as NFU president Meurig Raymond warned that British agriculture must not be used as a pawn in trade talks with other countries.

Mr Raymond said it was vital that British farmers continued to have access to the European Union single market following the UK’s decision to leave the EU.

“I think you have a very difficult task ahead to maintain that market access,” he told Mrs Leadsom during an NFU fringe meeting at the Conservative Party conference in Birmingham.

“My plea is this: When those negotiations start I do not want to see food and farming sacrificed for the City of London and other sectors of British society.”

If that happened, the UK would end up being hostage to other parts of the world where food and farming standards were lower.

“We want great British food to be one of our key exports – we want it to continue growing.”
Andrea Leadsom

“We have to be watching very carefully,” Mr Raymond told Mrs Leadsom during the fringe meeting at the Birmingham Rep Theatre on Monday (3 October).

Mrs Leadsom said Defra staff were passionate about the sector and would be “absolutely front and centre” of international trade negotiations as the UK exited the EU.

“It is exactly right that what we don’t want to do is go around the world looking for cheaper food that undercuts our own British farming sector,” she said.

Mrs Leadsom told the audience: “We want great British food to be one of our key exports – we want it to continue growing.

“Our standards in animal welfare, food safety and traceability are second to none and we want to continue with that.”

Mr Raymond said many farmers were concerned that the government was preparing a deal that could see a big increase in Australian lamb exports to the UK.

But Mrs Leadsom said: “We can’t [conclude] free trade agreements until we are out of the EU, but obviously we will start to negotiate them before we leave. There is no sudden change afoot.”

Mrs Leadsom said she “banged the drum” for the importance of the food and farming sector in front of other government ministers at every Cabinet meeting.

The food, farming and fisheries sector was discussed at every sub-Cabinet meeting on Brexit.

“There is absolutely no doubt in anybody’s minds how critical this sector is.”

Mrs Leadsom’s comments followed earlier remarks by George Freeman MP, who is a senior policy adviser to prime minister Theresa May that challenged the future level of farm support.

Addressing a fringe meeting of the Social Market Foundation, he said no sector would be more affected by Brexit than farming.

“If the British electorate looked at a chunk of money that was going to British agriculture, the likelihood of them saying ‘I would rather more of it went to the NHS’ is quite high,” he is reported as saying.