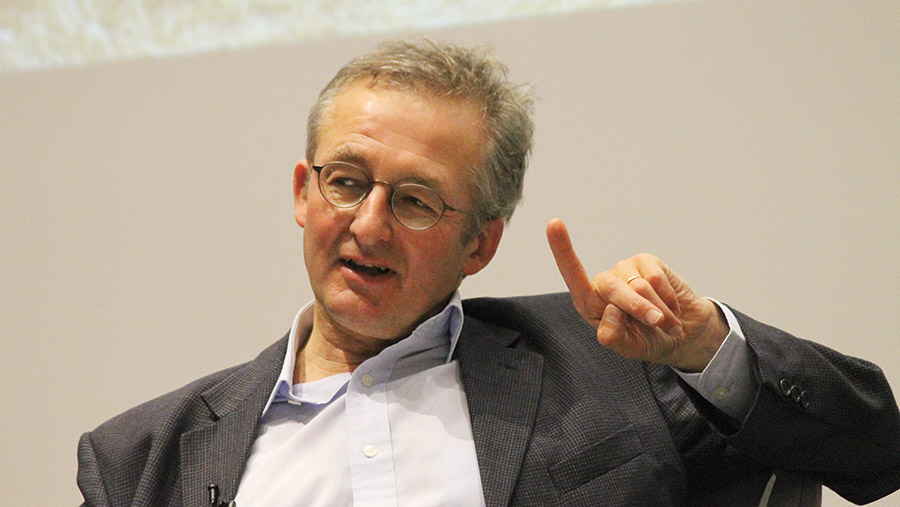 As Defra continues to take advice on the future shape of a post-Brexit agricultural policy, Dieter Helm, chairman of the Natural Capital Committee, is adamant that direct payments to farmers should be phased out.

But what is the rationale for his thinking and how does he see the wider issues around Brexit panning out? Farmers Weekly put these questions to him in an interview.

The Natural Capital Committee has recently suggested Pillar 1 direct payments should go, and what money is available for agriculture should go on Pillar 2-type schemes. Why?

I believe it is wrong to pay people on a per-hectare basis. The days of being paid for simply owning land are largely over. It is also self-defeating, as it just inflates the value of the land, pushing up costs and creating a large capital barrier for new entrants.

As for Pillar 2 – we should not tie ourselves to replicating it, but to the idea that this is a once-in-a-generation opportunity to stand back and ask what it is we want the money spent on.

Defra research shows some environmental measures have very high benefit:cost ratios, so that’s where you want to put your bucks.

Is there therefore a case for the government to increase the £3bn the taxpayer spends on agriculture?

We make that point. There is no reason to think future spending on public goods should precisely equal the amount of money in the CAP. It might be less, it might be more, but these benefit:cost ratios look pretty good in terms of value to the economy, the country and the people in it.

Without direct payments, how could British farmers compete with the French, Germans and Belgians?

The first consideration is what happens at the border. The essence of competitiveness is about trade and making sure there is a level playing field at the border.

You can do it in two ways – stay in the single market and play by the same rules, or get out and decide what tariffs you will apply.

The other point is that the BPS does not actually affect food production. What it does is increase the land price – and that makes it more difficult to stay competitive.

But without direct payments, our land prices (and other input costs) will fall, making us more competitive.

A third point is that after 2020, I expect the CAP to be very different. BPS payments in Europe are going to be coming down very sharply, not least because we won’t be contributing to the budget.

A common complaint about rural development schemes is the associated bureaucracy. Farmers have little appetite for this.

Often, farmers know best what would be the best way to enhance the environment, so I would like a system that is much more driven by the farmers, coming forward with their ideas and then bidding for the money.

You have often complained about large farms getting the bulk of taxpayer support, but is it not the case that large farms often do the most in terms of protecting the environment?

Nothing suggests that large-scale farmers are more or less environmentally interested than small-scale farmers. It’s a question of whether you want to rely on altruism or design a subsidy regime that encourages the kind of behaviour that is most conducive to the public good.

Farmers have always been very good at responding to profit signals.

What about food production? Don’t we risk further damage to our food security by targeting it all at the environment?

Why do you want to be self-sufficient in food? We never have been. But if we did face a military threat, like in 1939, then you would really want to make sure your inputs were produced here.

You’d want to control the genetics, produce the chemicals, manufacture the tractors and equipment. That’s what food security means.

Is rewilding an attractive proposition in terms of natural capital?

The environmental world is full of fashions, and one of the latest fashions is rewilding.

But rewilding confuses changing the type and intensity of farming in certain areas with the idea of no farming at all. Do people really want the Lake District to look like scrub?

So we should continue to subsidise farmers in the uplands?

We want a profitable farm sector, including hill farms, so they can have a decent standard of living. But there is a question about what they do to earn their money.

They must develop their businesses in a way that captures more economic value, including for the public goods they do.

Moving on to trade, do you think we are going to get a deal with Brussels?

In any rational situation, we would stay in the customs union at least. The trouble is, the Brexiters have already defined their red lines – they do not want any powers to come from the European Court of Justice, they want us out of the customs union and they won’t allow free movement of people.

The rest of Europe won’t allow a free-trade deal and concede all that.

The other point is that, despite its importance to the countryside, agriculture is actually a very small industry. So you have to ask yourself, in trade negotiations, how important is agriculture going to be?

Our economy is 70-80% services and manufacturing – these things will count much more. I don’t think the farming sector has realised how big a challenge this is going to be.

Do you think Brexit will actually happen?

I think it is certain that we will formally leave, but I’d have thought any European would welcome us back with open arms to the terms we had before, if we change our minds.

That may happen in five, six or seven years’ time. Alternatively, we could have a “Hotel California”-type transition – “You can check out, but you can never leave” – which could be two or even 10 years. We could still be in some version of the CAP by then.

It is said you have the ear of Michael Gove and that the Natural Capital Committee holds great sway over government thinking. Is that true?

The committee was set up a long time before Michael Gove came on the scene. He is secretary of state number five we’ve reported to. All of them have been supportive of what we are doing.

It is government policy to leave the environment in much better shape for the next generation. So we are there to help the government achieve that objective. But Michael Gove has taken a very deep and proactive interest in our work.

Some people say it is a shame that the 25-year plan for food and farming has now been side-lined, in the interests of pushing through the 25-year environment plan.

I completely disagree. The 25-year environment plan is the overarching framework within which agriculture sits. That is a significant change of Michael Gove arriving – and so it should be.

The most important part of natural capital is farming. I could not understand why previously we had two separate plans. It was a huge mistake.

Will you be reporting to Michael Gove in a year’s time?

There will be reshuffles in time. Michael Gove is a big hitter at Defra, but he is also a big figure in the leave campaign, and we’ll have to see if the politics of balancing the “leavers” with the “remainers” in Cabinet results in a change at Defra.

It’s a question of whether the department ends up being at the bottom of the Cabinet table or the top. Ask any senior civil servant what’s important and they say it’s that their secretary of state carries clout, first with the Treasury and secondly in the Cabinet.