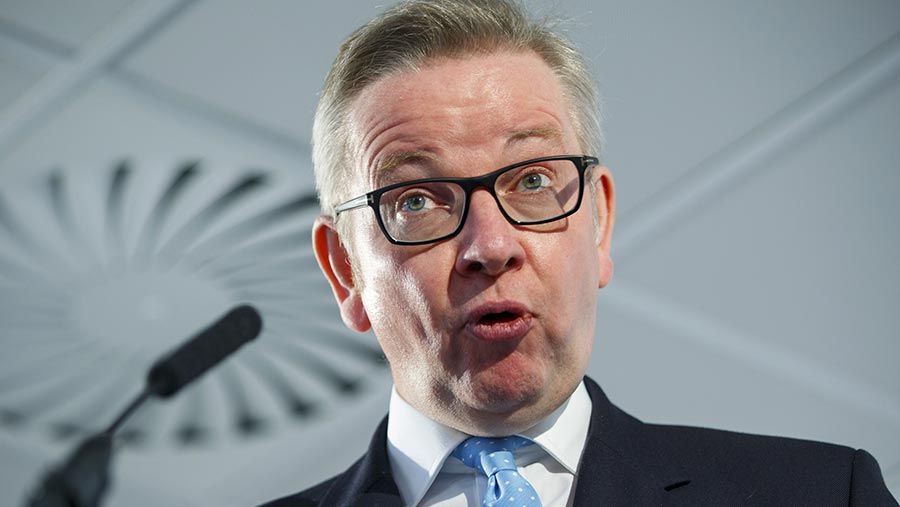 Farmers will have to “earn their subsidies” by delivering benefits for the environment and rural life after Brexit, Michael Gove will say in a speech later today (Friday 21 July).

Mr Gove will pledge to deliver a “green Brexit” when he delivers his first major speech since his appointment as Defra secretary.

Mr Gove will tell conservation body WWF UK in Woking, Surrey, that he “wants to ensure farmers are generously supported for years to come”.

There are “very good reasons” why the Treasury should support agriculture, he will say, because it is an industry “susceptible to outside shocks and unpredictable events – whether it’s the weather or disease”.

But farmers will have to “compete against each other” for taxpayers’ money to provide public goods “if the environmental benefits of that spending are clear”.

He will say: “Leaving the EU gives us a once-in-a-lifetime opportunity to reform how we care for our land, our rivers and our seas; how we recast our ambition for our country’s environment and the planet.

“In short, it means delivering a green Brexit.

“The Common Agricultural Policy [CAP] rewards size of land holding ahead of good environmental practice, puts resources in the hands of the already wealthy and encourages patterns of land use that are wasteful of natural resources.”

The Conservative government has pledged to keep farming subsidies to the same level until at least 2022. After that, the future is unclear.

Mr Gove, a strong supporter of Brexit, will say leaving the European Union will create new opportunities, and challenges for the UK government – especially in the area of environmental policy.

But leaving the EU means leaving the CAP, which will allow us to “take back control” and become a “global leader of our environmental policy”.

“We now have a historic opportunity to review our policies on agriculture, land use, biodiversity, woodlands, marine conservation, fisheries, pesticide licensing, chemical regulation, animal welfare, habitat management, waste, water purity, air quality and so much more,” he will add.

“Informed by rigorous scientific analysis, we can develop global gold standard policies on pesticides and chemicals, habitat management and biodiversity, animal welfare and biosecurity, soil protection and river management and so many other areas.”

The NFU is lobbying for subsidies to remain at at least the same levels after Brexit. But the union, which launched a paper outlining post-Brexit options in March, accepts reform is necessary.

Responding to Mr Gove’s speech, NFU president Meurig Raymond said a new policy needs to be properly resourced and introduced over a transitional period to ensure stability for farm businesses.

“A future agricultural policy must be comprehensive in its range, comprising measures for protecting the environment, improving productivity and managing volatility,” he added.

The Tenant Farmers’ Association also wants the UK government to keep the estimated £3bn of subsidies after Brexit. But it has suggested the money is split between environmental enhancement, research and development and farm business development.