An overwhelming majority of farmers are in favour of the UK leaving the European Union – and intend to vote that way on 23 June – according to new research by Farmers Weekly.

In an exclusive poll, we asked our readers exactly how they planned to vote in the upcoming referendum. Of 577 farmers who completed the survey, 58% said they wanted to leave, while just 31% said they wanted the UK to remain in the trade bloc.

These findings are at odds with views expressed by most farming unions in recent weeks and months, who are convinced that farming’s interests are best served by staying a member of the EU. 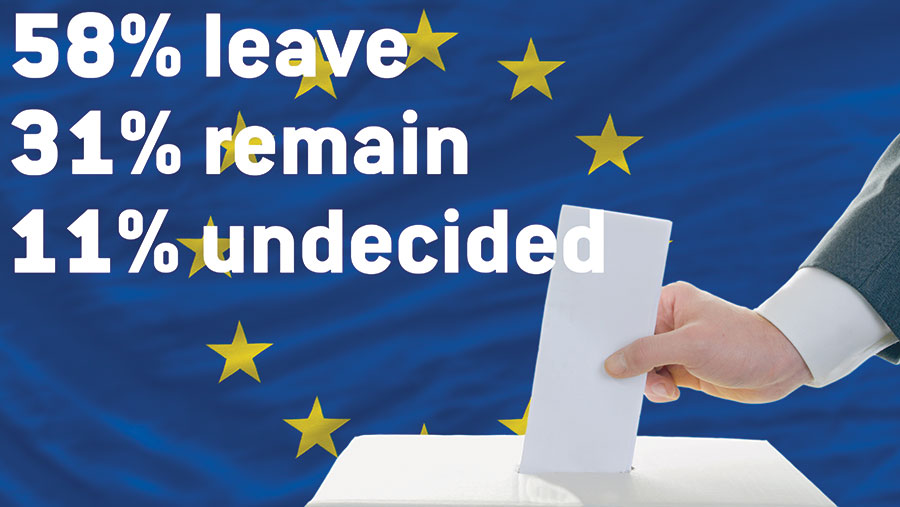 Our survey was conducted over a 10-day period in mid-April. While it was self-selecting, the sample size was significant and weighted to reflect the profile of the UK farming population.

The survey confirmed that opinions vary across different regions of the UK. Farmers in the Midlands, the South West, the North East and East Anglia were the most inclined to leave, while those in Scotland, the North West and Wales were slightly less so.

But, with the exception of Wales, nowhere did the proportion of respondents wanting to leave the EU come in below 50%.

Our analysis also looked at voting intentions according to farm type.

Again, no group fell below the 50% wanting-to-leave mark, though it was notable that those operating in the “unsupported products” sectors topped the rankings.

Tell us your views

Is leaving the EU a once-in-a-lifetime opportunity to improve life for UK farmers and citizens, or would it be a complete disaster?

Email fwfarmlife@rbi.co.uk by Tuesday 3 May and we’ll include a selection of your comments in Farmers Weekly.

Sugar beet, potato and vegetable growers, along with poultry producers, seemed most in favour of a Brexit, while beef and sheep producers were more likely to back staying in the EU.

The survey also looked at some of the factors influencing farmer voting intentions.

Among those saying they wanted to leave the EU, non-farming issues such as sovereignty and immigration were top of mind. When asked about farming-related issues affecting their choice, they overwhelmingly pointed to EU regulation and policies.

Conversely, those who planned to vote “remain” cited fears about the future of farm support and market access, both of which could have a big impact on their bottom line if the UK leaves the EU.

Producer organisations have expressed their surprise at the findings of the Farmers Weekly survey.

“We said a year ago that we expected the farming community would be overwhelmingly in favour of staying in the EU – it is startling the poll is showing it the other way round,” said Country Land & Business Association (CLA) external affairs director Shane Brennan.

The CLA said it was clear that many farmers were looking beyond the farmgate, with issues such as sovereignty and immigration coming into the equation.

“This reinforces our view that the government must prepare for all eventualities, so that they have a contingency plan in place if the vote on 23 June is to leave.”

NFU director-general Martin Haworth said the results were at odds with the NFU’s own survey in March, which found a clear majority wanted to stay in.

Read the full results of the Farmers Weekly survey