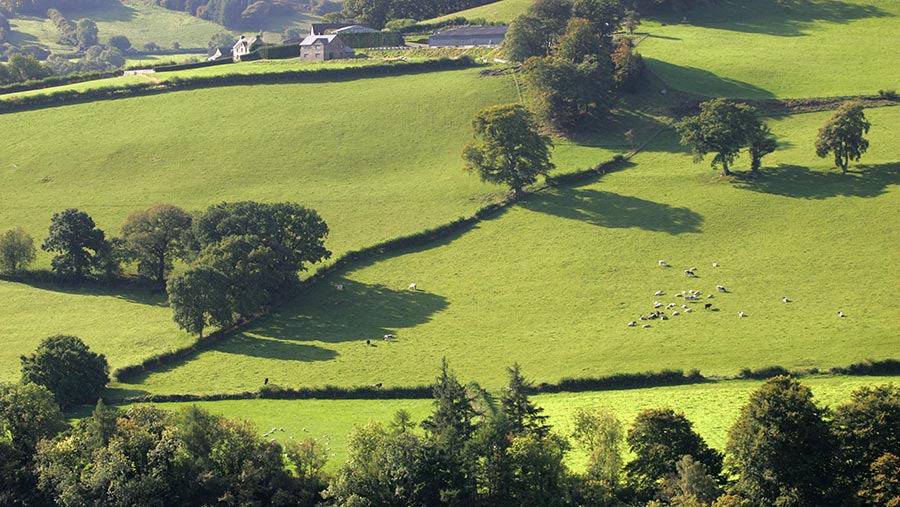 Welsh upland sheep farmers are extremely vulnerable to the impact of Brexit, with falls in farm income predicted no matter what trade deal the UK gets with Brussels.

A new analysis from the AHDB suggests that, overall, Welsh agriculture is less exposed than the rest of the UK to possible restrictions on exports.

But this is not the case in the sheep sector, where shipments to the EU account for about 30% of total production, and sales to other parts of the world another 5%-10%.

When it comes to domestic support, the country as a whole and the sheep sector in particular are especially vulnerable to any post-Brexit cuts.

“More than 80% of farming income in Wales derives from EU funding, which is far in excess of the UK average figure of 35%-56%,” the report says. “This means the CAP accounts for the largest amount of most farms’ profitability.”

To assess the possible effects of a new trade arrangement and cuts to farm support, as well as reduced labour availability post Brexit, the AHDB considers three possible scenarios – the “evolution” scenario, the “unilateral liberalisation” scenario and the “Fortress UK” scenario (see panel below).

Copies of the report “Exploring the implications of Brexit for agriculture and horticulture in Wales” will be available on the AHDB stand at the Royal Welsh show, where farmers will also be able to discuss the findings with AHDB staff.

Using “Welsh specific” data taken from the Farm Business Survey, the analysis then looks at the impact on farm incomes for different sectors, taking average earnings for the past three years as a baseline.

For specialist upland sheep producers, that baseline income is almost £25,000 per farm business, which is slightly higher than found on mixed sheep and beef units, either in the uplands or the lowlands.

But even under the “evolution scenario”, where support and labour costs stay the same, income is seen to drop by 6%, as the output value of sheep decreases due to the loss of export potential from being outside the single European market (see graph below).

This situation is massively exacerbated in the “unilateral liberalisation” scenario, where income drops 85% to just £3,000 per farm business. “This is due to a removal of Pillar 1 payments, which is not offset by the increase in Pillar 2 payments,” the report explains.

“Decreases in the value of output and increases in fixed costs also have an impact.”

But the most damaging set of circumstances would be the “Fortress UK” scenario, where the loss of direct support would be even greater, while fixed costs go up. The value of sheep output also drops by £9,500 on these farms.

“There is likely to be severe pressure on less efficient farmers and downward pressure on farm size, in order to reduce costs of paid labour,” the report says.

According to the AHDB, mixed units in both the uplands and lowlands have slightly better prospects, while dairying is seen to benefit from Brexit, especially in the “fortress UK” scenario.

Dairy farmers, who start from a much higher base income anyway (£60,600), are less vulnerable to drops in direct payments, but do benefit from higher farmgate prices due to the rising cost of imports as tariffs are applied.

The UK is outside the single market, however, so there are some additional trading costs, which push up farmgate prices.

Direct payments are removed altogether, although half that money is put back into rural development and agri-environment schemes.

Migrant labour is restricted, pushing up costs, while import tariffs are cut to zero on both EU and non-EU trade.

Direct payments are removed altogether, and only 25% of that money is put back into rural development and agri-environment schemes.

Even tighter restrictions are put on labour availability, pushing up costs. Tariffs are applied to imports from both the EU and the rest of the world, although some exceptions are allowed for beef and lamb.