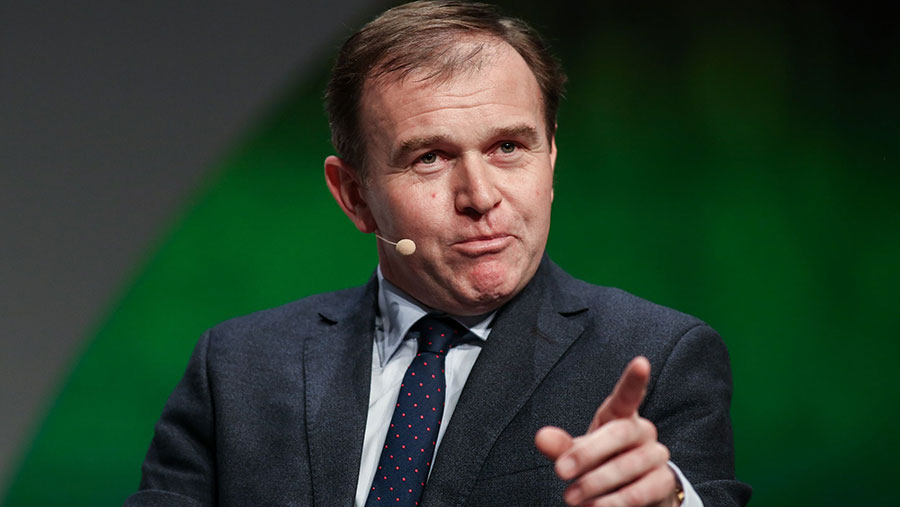 The EU would be stupid to refuse to sign a free-trade agreement with the UK when a deficit of £60bn of goods is at stake, according to farm minister George Eustice.

Mr Eustice made the comments during a tour of Field Barn Farm, in Kingsclere, Hampshire, on Thursday (26 April) where he was also keen to discuss Defra’s plans for the future of farming.

The minister, who is also Conservative MP for Camborne and Redruth, was asked about how confident he is UK agriculture could secure a comprehensive free-trade deal with the EU.

He said: “We have got a significant trade deficit with the EU, over £60bn a year in all goods. In food and drink alone, there is an £18bn annual trade deficit.

“I have had food producers and farming representatives from European countries come to me to say how critical it is they have access to the UK market.

I have had food producers and farming representatives from European countries come to me to say how critical it is they have access to the UK market George Eustice, Farm minister

“Whether it’s horticulture from the Netherlands, cheeses from France, salads from Spain, bacon from Denmark or beef from Ireland, they all want access to the UK market.”

Mr Eustice continued: “Our offer to the EU is: let’s have a free-trade agreement and a customs arrangement that limits friction at the border to an absolute minimum and doesn’t mean we need hard borders.

“It means we can recognise equivalence and have mutual recognition on certain areas. That’s our offer and something they’d be stupid not to take up.”

Mr Eustice’s comments come ahead of a key meeting of senior ministers on Wednesday (2 May) when they will discuss different options to replace membership of the EU’s customs union, which currently ensures frictionless trade with other member states.

Mr Eustice, who campaigned for Brexit in the EU referendum, said despite all the uncertainty surrounding the future for British agriculture, farmers should not be too concerned.

He was asked how he felt the UK farming industry would be coping in 10-15 years from now.

“I think it’s going to be fine,” said Mr Eustice. “There will be change. It’s big decision to leave the EU. People are bound to feel apprehensive, particularly over the fractious nature of the debate – it split the country in two.”

Parliament has a responsibility to put the country back together, to reassure those who wanted to stay, but answers the real decision of the referendum, which was to take back control of our laws, he added.

“If we do that, in five or 10 years’ time, people will look back and say, ‘it was the right thing to do’. A decade from now, you will find people saying they don’t think we should rejoin the EU.

“It will be the accepted, prevailing view that it was a change that needed to be made and everything is fine. We [will] have a partnership, but we have also regained some of the independence that we have lost.”

For the full interview, see the next issue of Farmers Weekly, out Friday 4 April.