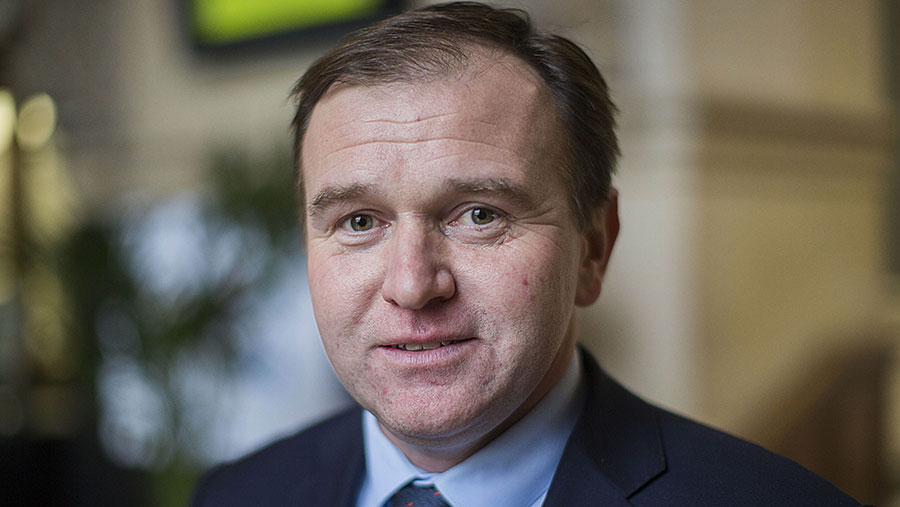 Defra minister George Eustice has pledged that the government won’t pull the rug from under farmers as the UK moves to a new post-Brexit agricultural policy.

Speaking at this week’s Northern Farming Conference, Mr Eustice faced repeated calls from delegates to provide farmers with long-term certainty so growers and livestock producers felt confident to invest in their businesses.

The government has pledged to maintain existing levels of farm support until 2020. But beyond that remains unclear.

It is also unclear whether the UK will retain access to the European single market post-Brexit – and whether farmers will be able to employ overseas workers.

The UK had a £60bn annual trade deficit with the EU – and more than £10bn alone in terms of food and drink. “The truth is, they need access to our market too, and the sensible thing for anyone to do is to agree an access arrangement to the single market that gives us tariff-free trade.”

On labour, Mr Eustice said. “We in Defra are working very closely with the Home Office on this issue. Just because we want to have controlled immigration going forward – we don’t want a complete free-for-all – it doesn’t mean we are going to pull up the drawbridge.”

There would be many opportunities to put in place work permit arrangements, Mr Eustice told conference delegates at Hexham Auction Mart, Northumberland. “This would enable migrant workers to come to the UK. We are looking at all these issues as we devise future policy.”

And on subsidies, Mr Eustice said the right approach was to design a post-2020 policy and then work out how much funding was needed. “It is not a question of whether we will support farming and the countryside – we will. It is how we support it that is the question.”

The conference also heard from Peter Kendall, chairman of the Agriculture and Horticulture Development Board. Urging farmers to prepare for tough times ahead, he said: “I don’t believe there is going to be a shedload more money – plan for less support and more competition.”

David Harvey, Emeritus Professor of Agricultural Economics at Newcastle University, said it was important that payments to farmers remained – at least in some form. Removing direct payments would compromise some farms “beyond survival,” he warned.